Discussions about new energy sources can be nuanced, complicated, and very technical. However, these conversations are important. As a citizen of the world, it is beneficial to be as informed and up-to-date as possible.

In order to understand wind energy facts many people often encounter questions like:

To best understand a multifaceted topic like this, it is important to consider it holistically and with unbiased information. This review will offer an in-depth look at wind energy pros and cons, history, and modern uses in order to paint as full a picture as possible.

What Is Wind Energy?

Wind energy is a form of power production designed to harness air currents that naturally flow through the earth’s atmosphere. Wind turbines are the key to answering the question of what is wind energy. Turbines are the machines used to capture the kinetic energy of these air currents or wind, and they convert this into usable electricity. 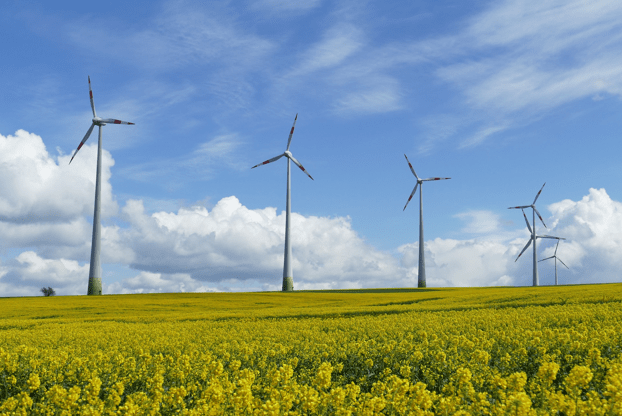 However, one unavoidable wind energy fact is that not all turbines are the same. There are many different uses of wind energy, and different types of turbines serve different purposes.

Large turbines are able to produce larger amounts of power proportional to their size. For example, the largest turbine in service today is 20 stories tall and makes enough power to run 1,400 homes. Smaller options are also available around just 30 feet tall and can power a single home, telecommunications dishes, or water pumps.

Because of this, the uses of wind energy and the turbines that serve them can be divided into three major categories:

To understand how wind energy works, it is important to consider each aspect of the process in detail. Wind power relies on natural processes and man-made machinery, which must be understood in conjunction with one another. All of these wind energy facts are like puzzle pieces that must be fitted together to form a comprehensible picture.

Contrary to how it might sound, wind power is actually a form of solar energy. It is an undeniable wind energy fact that its power begins with the sun. When air is heated by the sun, it warms and rises higher into the atmosphere, and it is then replaced by cooler air—this movement is what creates the wind.

The natural processes and factors that affect the wind are only part of the equation for answering how wind energy works. The wind is the source of the energy, but wind power is produced with machines that are able to harness and channel that energy.

The machines used to produce wind power are called wind turbines. They are much like windmills in function and appearance, but they produce electricity instead of grinding flour. Wind turbines are made of a few basic parts:

The tower is the base of the turbine. It holds the blades into the sky to allow them to capture the wind as directly as possible. The blades fan out from the tower like an airplane propeller and turn on an axis as they are pushed by the wind. The blades are connected to a shaft or drive train, which spins as they turn. The spinning shaft is connected to a generator, which converts the kinetic energy of the spinning into electricity. 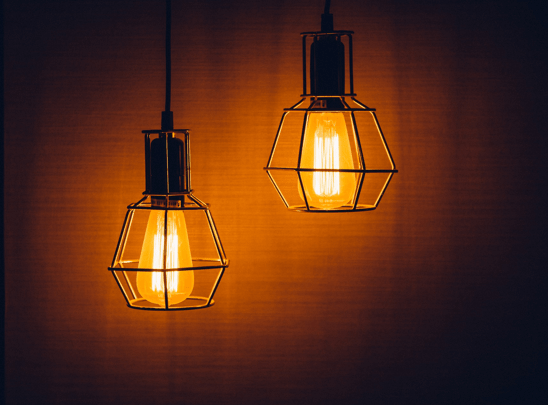 Because wind directions are subject to sudden changes, wind energy information exchanges and adjustments are important. Most turbines include equipment that can measure weather conditions and adjust the position of the blades. This allows turbines to capture energy with optimum efficiency regardless of weather changes.

What Is a Wind Farm?

One of the most common uses of wind energy is the mass production of electricity to be fed into a utility grid. In order to do this, wind turbines are often grouped together to contribute energy to a single power plant. These plants are often called wind farms, and they can produce and distribute power to utility customers just like any other type of power plant.

What Is Wind Energy’s History?

The question of what is wind energy can be answered in a variety of ways. People have harnessed the power of the wind for many centuries to serve many different purposes. Wind energy as we know it today refers to the production of electricity; however, it has also been used to sail ships, grind grain, and pump water in the past.

Though electric turbines were first developed in the 1930s and 1940s, until the 1970s, very little thought was given to the potential advantages of wind energy. However, the energy crisis drove Americans back into the arms of alternative energy sources, and the pursuit of wind energy information was on.

During this time, the U.S. Department of Energy spearheaded some major wind energy research projects. These helped pave the way for the development of the wind turbines that are in use today.

Between 1981 and 1986 15,000 turbines were erected in California. They produced enough energy to power every home in the city of San Francisco. The high cost of fossil fuels coupled with mounting concern for the environment led to the adoption of alternative energy tax credit programs. These programs helped the industry find a lasting foothold in the American economy even when fuel prices began to decline in the 1990s.

Throughout the years, the United States has had a fluctuating interest in how wind energy works. When fossil fuels become less convenient, interest peaks, and as gas prices go down, interest is lost.

Increased conflict over oil and growing concern over the environment has boosted the popularity of the question what is wind energy in the American psyche. Currently, the advantages of wind power are enjoying a period of rapid growth, research, and development that will likely last for the foreseeable future.

Like most things in life, there are many pros and cons for wind energy. It is important to gather balanced wind energy information to ensure that an unbiased answer to the question what is wind energy can be found. As an alternative energy source, it offers many advantages including:

Wind Energy Is Inexhaustible and Low-Conflict

One of the largest advantages of wind energy is that it is a renewable resource and can never be exhausted. When the wind is harnessed, it does not interfere with any natural processes. The Wind can be harnessed to produce power, but it cannot be used or consumed like other kinds of fuels. Because it is inexhaustible and infinite, it cannot be fought over like oil or methane.

A huge advantage of wind power is that it is an extremely clean option for electricity production. It does not produce any pollution in either its used or distribution. Unlike fossil fuels, it does not involve any air pollution or the production of greenhouse gasses.

The development of wind power can also help reduce the number of fossil fuels consumed in power production. In 1990 California’s wind power plants contributed enough power to the grid to prevent 2.5 billion pounds of carbon monoxide and 15 million pounds of other pollutants from being produced.

It would not be unreasonable to seek an answer to the question how does wind energy work to improve the economy. The perfect energy source would strike a balance between both environmental and economic sustainability.

There are definite environmental advantages of wind power, but it has also proven itself friendly to the economies of rural communities. 99.8% of all wind farms are located in rural areas and have created 88,000 jobs in the U.S. This number will only increase as the industry expands. 70% of these farms are located in low-income countries, which makes them particularly crucial to economic development.

Wind energy is also less likely to interfere with the use of the land in the rural communities. This is because the land occupied by wind farms can be used simultaneously for power production and other pursuits like farming or ranching. Landowners can lease their fields for more than one purpose at a time.

There may be many pros and cons of wind energy, but it has proven to be a very efficient choice for clean energy production. Due to improved turbine design and technology, most are able to produce electricity 90% of their operational time.

In 2012 the DOE National Renewable Energy Laboratory conducted a study to gather wind energy information concerning average wind climates throughout the United States. This information was compared to how much power could potentially be produced based on those findings. This study concluded that around 33,000 TWH of potential power could be harnessed by the wind on U.S. soil, which is nearly 8 times more power than was used by U.S. residence in 2012.

Popular Article: Best Credit Cards to Have | Guide | What is the Best Easy-to-Get Credit Card to Apply For?

Wind energy has many great selling points. But in order to truly answer the question how does wind energy work, it is important to look at both the pros and cons of wind energy.

Wind energy has been known to produce noise pollution from the sound of the turning blades. The turbines themselves also impact their environment from an aesthetic point of view because they must be placed in open areas and can obstruct the view around them.

Some experts have raised concerns about the environmental impact of wind power due to the effect that it can have on wildlife. Bird and bats have been known to die as a result of flying into the windmills themselves. Though this is still a concern, these instances have been greatly reduced in recent years do the improvements made in wind farm site selection and technological developments.

Though there are many wind energy pros and cons, one big disadvantage is that many wind farms must be built in remote locations by necessity. This is to ensure that the rotors have adequate space and that no buildings block the flow of the wind. This means that power from wind energy must be transported great distances to cities and towns.

It is also an undeniable wind energy fact that turbines can only produce energy while the wind is blowing at particular speeds. The Wind must be at least 6 to 9 miles per hour in order for the rotors to turn enough to produce energy. But, turbines cannot safely operate in winds greater than 45 miles per hour without risking damage to the equipment. 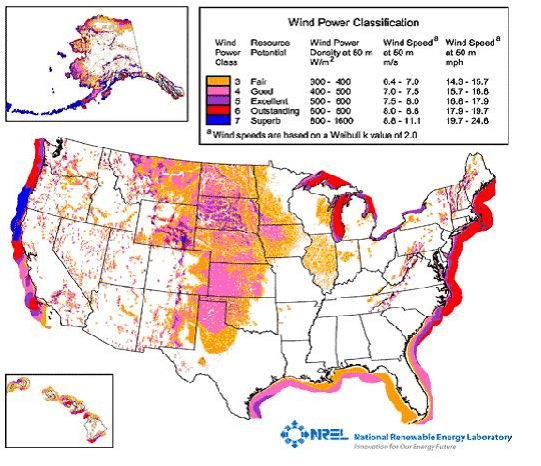 Because of these limitations and different regional factors that can affect the presence and persistence of wind, some locations will be better suited than others for the uses of wind energy. This means that wind farms are limited in where they can be built, a drawback that some other energy sources do not have.

Understanding how wind energy works can be a complex undertaking. However, gathering the best wind energy facts makes it easier to weigh the pros and cons of wind energy.

Keep some of our larger points in mind as you search wind energy information:

The world of wind energy facts is constantly changing. New technologies are in continuous development, and energy research is always searching for possible improvements. Because of this, the true understanding of alternative energy sources like wind power is a constant learning process. Our review can provide a detailed overview of the current state of the industry and help an interested citizen of the world better understand the alternative energy technologies available.