What Is Brexit? – Get the Definition & Review (Britain Leaving EU?)

A Short Guide to the EU

Before examining the implications of England leaving EU membership, it’s important to understand what the EU is, why it was formed, and what its purpose is today.

Planning for the European Union started after the Second World War as an effort to unify Germany and France. The EU was formally established in 1993, after the signing of the Maastricht Treaty.

The European Union is a group of 28 member states which use a series of policies and institutions to set political and economic standards. Being a part of the Union implies an agreement that the member state will abide by the policies in place and fulfill its member obligations. In exchange, the member states benefit from being involved in the EU.

If citizens vote for the UK to leave EU ties, that representation will be lost, and the country would have no say in the decisions of the remaining countries.

While each member state is independent, the countries agree to abide by the agreements made within the Union. The arrangement is meant to be mutually beneficial. Countries in the Union work together to allow for the free movement of people, money, goods, and services throughout the area.

Is England Part of the EU?

The following are the 28 countries that make up the EU: 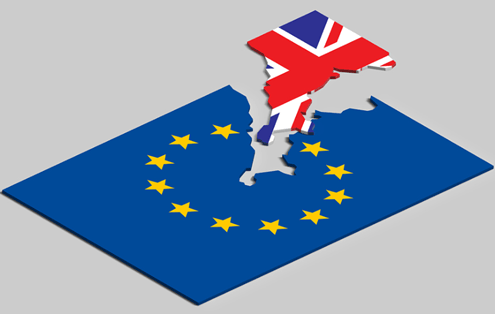 While England is currently a major player in the EU, the country is now debating whether to remain a part of the Union. The term Brexit is an abbreviation for Britain Exit. The Brexit definition refers to the possibility of Britain leaving EU membership and being free from the regulations set by the group.

The nickname is in line with one created when Greece was considering leaving the Union. The question at that time was what is Grexit? The abbreviation for Greek Exit referred to discussions about whether Greece would leave the EU as a result of the country’s debt continually rising, unemployment increasing, and recession looming. The Guardian offers more information about Greece’s economic decline and the debate of whether the country should leave the EU.

While the abbreviations are the same, the reasons for leaving and the potential results of an exit from the Union are very different. Due to this, leadership and citizens are divided as to whether such a huge change would benefit or harm the country. According to survey results from Chatham House, the numbers are close, with citizens divided evenly.

How Did This Debate Come About?

During the 2015 election, Conservative Party leader David Cameron promised that he would support a referendum if conservatives stayed in power. The plan was for the country to negotiate the specifics of its role in the EU. The Brexit definition comes into play if those negotiations don’t go according to plan and citizens decide that they need to branch out on their own.

Will Britain leave the EU? Several political groups hope that the negotiations will lead to that decision. Pressure from conservative groups is causing leaders to, at least, strongly consider the option. Cameron himself is working toward a different goal – to prevent England leaving EU membership and simply negotiate better terms that would keep all parties content.

After winning the 2015 election, Cameron traveled and connected with other leaders in an effort to negotiate those terms. BBC News outlines the areas of concern for England. While addressing several main topics involving currency, trade, immigration, and sovereignty, Cameron asked that England have the ability to opt out of certain EU restrictions for further freedom. The question is also, will Britain leave the EU to find that freedom and prosperity, or will the plan backfire and cause more strife for the country?

Since the formation of the European Union, no country has gone through the process and removed itself from the Union. Since this is uncharted territory, there is a great deal of skepticism and fear about how the decision could affect England, along with the rest of the members of the EU.

Related: The Frugal Entrepreneur: 10 Tips for Starting Your Own Business with No Money

What Would the Potential Results of Britain Leaving EU Membership Be?

Those supporting Britain leaving the EU claim that the break could help the country to be more competitive in the global market, according to Investopedia. Britain has already taken one step toward creating distance by choosing to opt out of use of the euro in favor of keeping the British pound.

Another area of concern is immigration. Is England part of the EU movement to enable free movement throughout the area? Yes and no. Currently, England has opted out of open border sharing with several other countries. For those who support breaking from the EU, closed borders aren’t enough as immigrants are flocking to the UK to live and work.

What is Brexit going to change in terms of immigration? While the EU has laws in place to allow any individual from a member state to live in another member state, leaving the Union would allow for immigration rules to tighten up. This would cut down on the huge influx of immigrants which Brexit supporters say are draining resources.

One of the most important questions is how breaking away would change the way Britain would interact with the rest of Europe and the rest of the world, especially in terms of trade. Those supporting a British exit argue that becoming more independent would grant the UK the opportunity to branch out and grow its position in international trade.

On the other hand, many question whether Britain could hold its own without the support of the EU. The Economist points out that nearly half of Britain’s exports go to other member states of the EU. Without the relationships and agreements of the EU in place, the future of trade would be uncertain. With England leaving EU ties, not everyone has faith that the country would be able to rise to become a power player.

Most analysts and reporters agree that an actual break from the EU is unlikely. However, with a great deal of pushback from conservatives and growing unease among citizens with the current state of the country, the process of negotiating will be difficult.

As with most political issues, there are several groups fighting for either side of the argument. Each side has major groups, along with smaller grassroots organizations, representing citizens.

Britain Stronger in Europe is the group saying that Britain leaving EU membership would be devastating to the economy, politics, and culture of the country. The group supports staying in the EU, as a place in the Union offers safety and more opportunity for citizens. The power of one group fighting to stay in the EU is giving Britain Stronger in Europe a united voice.

Vote Leave is the group spearheading the campaign for Brexit. The group says that change is necessary in order for Britain to take back control of its future. Vote Leave raises concerns that the growing number of member states in the EU and restrictive laws could be negatively impacting the potential of Britain to be a more powerful and prosperous country. The answer, it says, is England leaving EU restrictions behind.

Leave.Eu is a grassroots organization that is fighting to become the voice of those supporting Brexit. The group is funded by donations and is working to make citizens feel as though they have a real voice in determining how new laws and policies could be put into place after leaving the EU.

What Are Other Countries in the EU Saying?

While many factors will go into the decision of Britain leaving EU membership behind, other countries are adding their opinion to the debate. The Guardian collected information from resources in several countries to discover what leaders are saying about the decision.

As the Wall Street Journal notes in a story from the time of the Greek referendum, Germany is arguably becoming the most powerful country in Europe. Naturally, many people are interested in the thoughts of Chancellor Angela Merkel as England’s referendum draws closer.

Merkel has made it clear that she wants England to stay put. England leaving EU membership would mean that the entire Union could lose its power position. To make her point, Merkel argues that England would also lose a great amount of power if the country chooses to break away from its EU allies. While Merkel supports the desire to make changes and concessions, she will push back against radical change.

French leadership has commented on the negotiations Cameron is attempting to make in order to give Britain more freedom and is asking, what is Brexit going to solve? In an article from The Guardian, it states that most French leaders are in favor of the UK remaining a member of the EU and believe that the Union could continue benefitting the country. However, the number of concessions Britain is asking for may be irking leaders who could be seeing Cameron as not being a team player.

Finally, leaders in both Poland and Spain are questioning why a country would want to walk away from the benefits of being a part of such a well-connected network. Both countries have benefitted enormously from economic and political policies. While all countries involved in the EU acknowledge that there will also be shortcomings, the benefits far outweigh the sacrifices for these two countries.

Read More: Quick Guide on How to Find and Choose a Financial Advisor

Will the UK Leave the EU?

A final decision has not yet been made to determine whether Britain leaving EU membership is best for the country or if remaining in the Union makes more sense. In order to make a decision, there will be a referendum where the matter will be put up for a vote.

With the vote having such a huge impact on the country, there has been a great amount of debate about all parts of the referendum, down to the detail of wording on the voting slip. The wording has been changed so that voters will choose between the options to “Remain a member of the European Union” and “Leave the European Union” rather than answering a simple yes or no question for the UK to leave EU ties or stay.

When the referendum takes place, the following groups will be eligible to vote.

The UK has stated that the referendum will take place before the end of 2017. However, there is talk of moving that date up to as early as June.