In this day and age, there is no reason to do business with a bank only because your father has had an account there for ages. Chances are, your dad never bothered to check out the advantages of different banks. And the differences are not negligible.

For example, you can save $360 per year just by putting your money in a bank that doesn’t charge maintenance or ATM fees. However, this article is not about finding a cheap online bank. Instead, we, at AdvisoryHQ, will help you choose among the safest players in the business.

For your benefit, we will pit two heavyweights against each other: Wells Fargo vs. Chase.

Both banks are both members of the Big Four of American banking (the other two are Citigroup and Bank of America). Each of them has approximately a quarter of a million employees. 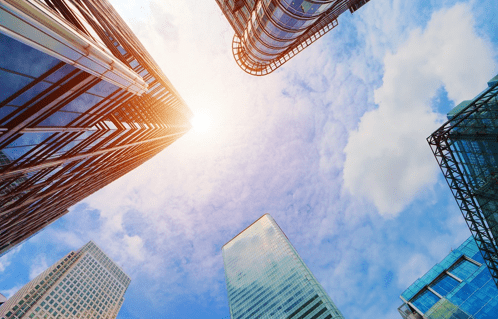 The Black Magic of Big Banks

The question, “Is Chase a good bank?” might sound strange to the ears of anyone who actually followed what was going on in the 2000s. Banks were the classic villains in the 2008 crisis, but they got off nearly scot-free.

If you like dark humor, take a look at the “Wheel of Misfortune.” The spokes in the roulette wheel are various groups of Chase customers that received huge amounts of money from the bank. Why? Because Chase was forced to pay settlements for fraud or illegal activities. The total was $36 billion for a period of merely five years.

First Round: Sizing up the Opponent

At the outset of the California Gold Rush, two gentlemen, named Wells and Fargo, decided to make a profit and founded a joint-stock company in 1852. Interestingly, two years earlier, they had founded an even more famous company: American Express.

In fifteen years, they had a stagecoach and banking empire, with lines all over the West. When the railroad endangered their business, they bought the railroad. It set in motion a snowball which has been rolling ever since.

Chase can boast that it is fifty years older. Furthermore, before Chase vs. Wells Fargo there was Chase vs. Bank of New York. However, in 1804, Chase’s founder, American Vice President Aaron Burr, killed the founder of the only other New York bank and got away with it. That’s how you take out the competition.

Still, Wells Fargo does come first as a more active participant in American history. Operating 11 museums, it is the hands-on winner.

“Footprint” means the number of places where you can find a branch of a bank, so this is a very straightforward comparison.

Automatic teller machines are another easy measure. This time, the winner is Chase, with 18,468 bank-branded ATMs, compared to Wells Fargo’s 13,000 ATMs. Having a bank with such a huge ATM network is the second best thing. The very best thing would be having a bank that reimburses you for taking money from third-party ATMs. You can have that with Chase, under certain conditions, as we shall see.

Nowadays, savings are the worst kind of investment you can make. Interest rates were never anything to write home about, but, recently, they have become quite steep.

In 2015, the average savings account in a brick-and-mortar bank delivered only 0.08% in interest. The final result for 2016 might be even worse since there has been a downward trend: the interest was 0.1% in 2014.

On average, if you kept $10,000 in your account throughout 2015, your annual profit was $8. Saving money is definitely discouraged. Still, everyone needs checking accounts.

Some fees may seem incomprehensible. Banks are more interconnected than ever, but almost 75% of traditional bank accounts will still charge you if you use some other bank’s ATM. And while interest rates have been falling, ATM fees have been rising, from an average of $2.30 in 2014 to $2.46 in 2015. You can avoid ATM fees if you carefully plan your withdrawal locations, but let us be frank: nobody does that all the time. In fact, almost one third of all ATM withdrawals are made from the ATMs of other banks.

Now your might be thinking: is it possible to avoid fees altogether? Yes, it is actually possible, but it might be hard in our Wells Fargo vs. Chase showdown. These pie charts collect the data from the 50 largest brick-and-mortar banks and the 25 biggest online banks: 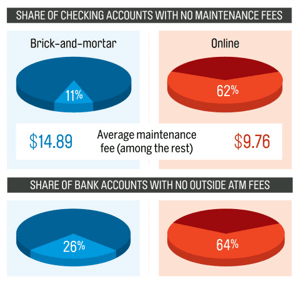 As you can see, not everyone charges fees. If your priority is saving every penny, you are better off with online banks. On the other hand, most people still prefer the human presence of a clerk.

While the first round of Chase vs. Wells Fargo was easy to judge, the second round is less clear-cut. Checking accounts have several different fees depending on what you need your account for.

According to the above table, Wells Fargo seems to be the winner. However, this comparison is more than a little unfair, as it compares very different checking accounts (the criterion was the popularity of the accounts, not their equivalence). If you check the comparison of savings account fees on the same page, you will see they are absolutely identical. So we will make this a draw.

As we said, the absence of fees is possible. But, as shown below, only if you have a lot of money in your account. Considering the large sums you will be getting from interest rates, you should ask yourself if avoiding fees is worth tying up all that money in the bank instead of investing it somewhere more profitable.

Chase has four main checking accounts, which are based on the following principle: the bigger your balance, the sexier the perks you will be getting. We will not go into details, but you can take a look at the Chase table of checking accounts.

High School Checking is for students ages 13-17 while College Checking is for college students ages 17-24. They definitely have the best terms, but since a linked parent/guardian checking account is a requirement, you end up paying the standard fees anyway. However, there is something else that could tip the scales in the Wells Fargo vs. Chase checking account round.

In fact, we like the added protection that you get when you take Chase’s debit cards. Its Zero Liability protection feature means that you will not be responsible for any unauthorized debit-card transactions, providing you promptly report the abuse of your card.

As for the offer of Wells Fargo, there is one account less, but the principle is the same: discounts and fee waivers are offered for higher balances.

The bottom line is that there is not much of a difference between the two. Still, this round of Wells Fargo vs. Chase goes to Chase because of the lower minimum opening deposits.

Popular Article: Bank of The West Reviews – Everything You Need to Know (Rewards, Wealth Management & Review)

While the second round was trickier than the first, the third round of Chase vs. Wells Fargo is much more complex to judge. Mortgages depend on a huge number of parameters, from interest rates, down payments and repayment periods to family status and whether the house is a primary or secondary residence. And, last but not least, your credit rating is taken into account.

Both Wells Fargo and Chase will check your credit report to see if you have been fulfilling your other obligations. If you want to know what your credit report looks like, you can get a free copy here. If you have missed on some payments, don’t worry just yet. Go and talk to the banks. It all depends on whether they think you will be able to pay in the future.

In the Chase vs. Wells Fargo mortgage round, we will take a look at interest rates, prequalifications, and variety. The best thing to do is to try out the calculators (see images below), and contact the banks to describe your particular case.

With a 30-year fixed rate, Wells Fargo offers an interest rate of 3.875% while Chase has a rate of 3.500%. If we look at the 15-year fixed rate, it is 3.125% for Wells Fargo and 2.875% for Chase. While things are more complicated than that (the rates depend on the credit score, down payment, and whether it is the primary residence), we could say that Chase has an advantage here. 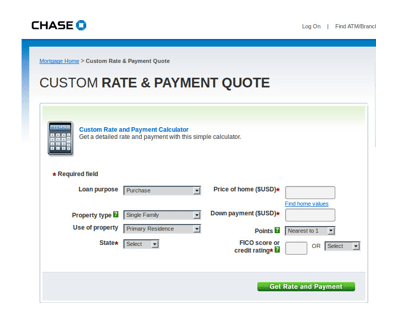 Wells Fargo seems to come out ahead on this one since you can get a general estimate of the possible loan amount only by providing the information you want while Chase requires a credit report. 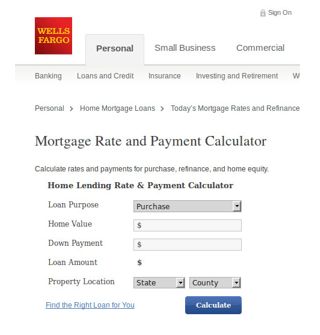 This Wells Fargo vs. Chase article highlights the differences between the two, as well as their strengths and weaknesses, in order to assist you in deciding whether one bank may be better for your needs.

Chase may be a better option if you require:

Wells Fargo may be the option to go for if you need:

You should now have a more clear idea of which bank will suit your needs best. If you still have doubts, questions or concerns, be sure to stop by the nearest branch and speak directly with a bank representative.