Umpqua Bank Reviews – What You Need to Know (Complaints & Review) 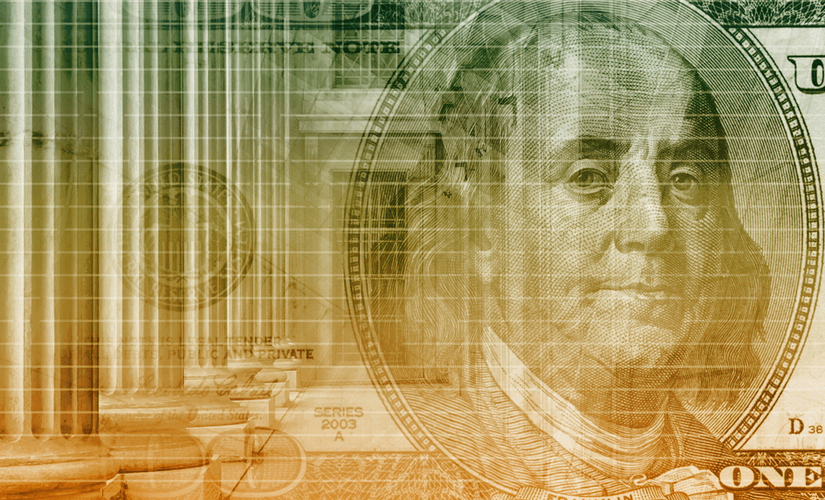 Through their slogan they proclaim themselves to be “The World’s Greatest Bank!” but a quick internet search unearths a slew of Umpqua Bank complaints written by consumers who beg to differ.

Below we present a detailed Umpqua Bank review of their services as well as address the components of the many negative Umpqua bank reviews that can be found littered across the web. 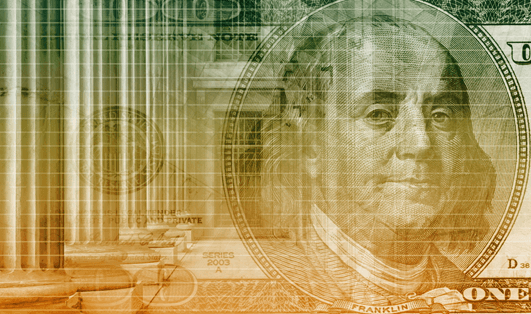 Upon encountering Umpqua Bank, many people find themselves wondering, “what is Umpqua?” 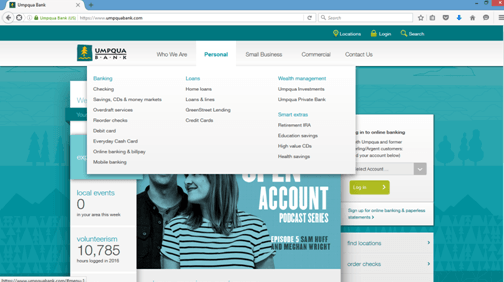 In additional to personal and small business banking, Umpqua Bank also offers a wide range of commercial banking services for large businesses, including:

In 2013 Umpqua Bank announced plans to merge with Sterling Financial Corp, headquartered in Spokane, Washington, in a $2 billion dollar deal.

Through the acquisition of Sterling Financial, Umpqua Bank almost doubled its size and reach. When the merge was finalized in April 2014, Umpqua Bank CEO Ray Davis issued this statement in regards to Umpqua Bank’s mission going forward:

“Today, we took a significant step forward in achieving Umpqua’s goal of building a community bank at any size, one that offers the products and expertise of a large bank, the engagement of a community bank, and the innovative customer experience of a leading retailer. Together, Sterling and Umpqua look forward to serving our customers, communities, and shareholders with expanded resources and geographic reach.”

Many of the Umpqua Bank complaints and negative Umpqua Bank reviews found around the web are made by former Sterling Financial customers who feel that Umpqua did not handle the process of changing branch locations from Sterling to Umpqua well for customers.

Umpqua Bank Reviews – What Customers Have to Say

There are a number of online Umpqua Bank complaints left by customers who are dissatisfied with what they consider to be Umpqua Bank’s large number of higher than normal fees.

Umpqua Bank offers three checking accounts for personal banking, and all have a monthly fee associated with them, though the fees can be waived if certain requirements are met.

Most consumers that have written Umpqua Bank reviews complain about the fact that Umpqua Bank charges their own customers an ATM fee for using an ATM that does not belong to Umpqua, so that they end up paying two fees for this service–one to the outside bank that owns the ATM and one to Umpqua Bank.

Most banks have fees associated with their day-to-day banking activities, but according to My Bank Tracker, some of the fees charged by Umpqua Bank are higher than the national average charged by other banks in the United States.

Fees Charged on Loans and Lines of Credits

Other Umpqua Bank reviews note complaints about the fees associated with the personal loans and lines of credit offered by the bank.

A common complaint made by many consumers in their Umpqua Bank reviews is that these fees were not clearly explained to them up front and therefore came as a surprise to them later. However, these fees are disclosed clearly on Umpqua Bank’s website.

Some of the Umpqua Bank complaints left online have been made by former Sterling Financial customers who complain that they were not being charged any fees by Sterling but began being charged fees after the switch without any prior notice or disclosure.

While many banks offer a twenty-four hour customer assistance hotline, Umpqua Bank’s customer service department is available Monday–Friday from 6 a.m. to 8 p.m. and Saturday–Sunday from 8 a.m. to 5 p.m. Customers who run into issues outside of these hours have to wait until the next day to gain assistance.

Other common Umpqua Bank complaints and negative reviews are that there are often long waiting times when calling the customer service hotline, that calls are dropped mid-call with no explanation, and that messages left for customer service associates are seldom returned.

Customers also make complaints that customer service representatives can be rude, argumentative, and seem poorly trained. There have also been complaints of high turnover at the branch level, making it difficult for customers to build long-term relationships with personnel. 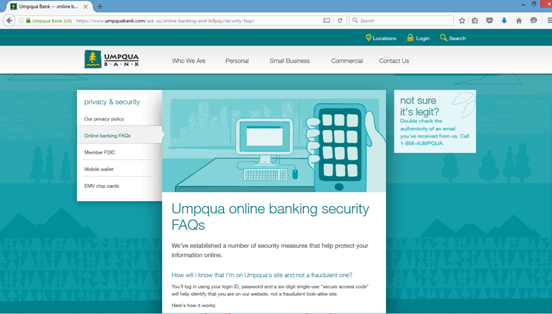 Another common theme among online Umpqua Bank reviews is complaints about the company’s online banking options and system.

Many reviewers have stated that Umpqua Bank’s online banking system is unreliable and at times has gone down for days, leaving them without access to their account information or funds. Many frustrated customers have stated in their reviews that when they call customer service about the outage, no explanation for the problem can be given.

One Umpqua Bank review claims that during a system upgrade the customer did not have access to his online banking account for a total of ten days. Many other customers have complained that the system is faulty and does not always work correctly.

Another reviewer wrote that the online bill pay system is not reliable and that he has had several payments that were scheduled to go out that were never sent, causing him to incur late fees with his creditors.

Consumers have also complained that Umpqua Bank does not have the option of making loan payments online, and making a payment over the phone incurs a $12 fee.

Downside of Using a Local Bank

In Umpqua Bank’s own words, they consider themselves to be a community bank. They are only located in five states–not nationwide–which has caused frustration for some customers.

There have been some poor reviews given due to the fact that customers do not have access to the bank while traveling and have to incur high ATM fees as a consequence. There have also been Umpqua Bank complaints that, due to the stringent fraud protection system they have in place, utilizing a debit or credit card while traveling can be difficult.

In addition, customers have complained that payments they make to vendors located in other states have been routinely declined without warning due to the limitations in Umpqua Bank’s fraud protection policy.

For each handful of poor Umpqua Bank reviews found online, there will also be a glowing review left by a customer. The majority of the Umpqua Bank complaints found online appear to be made by former Sterling Financial customers who are not satisfied with the way Umpqua Bank handled the merge of the two companies and who feel that they are not receiving the same level of service they once had with Sterling.

There are many longtime Umpqua Bank customers who are very satisfied with the service they have received and have left glowing reviews.

In the past three years, the Better Business Bureau has logged a total of 30 consumer complaints against Umpqua Bank’s home office in Portland, Oregon, and most of those were resolved by Umpqua to the customer’s satisfaction.

Consumers who are considering using Umpqua Bank should be sure to do their due diligence by carefully studying the information available on Umpqua Bank’s website, reading the Umpqua Bank reviews found on the web, and taking note of the Umpqua Bank complaints that have been made by consumers in order to best make an informed decision.