Top Banking Firms in the UK

It’s an ongoing debate whether the banking industry in the UK is competitive enough. Either way, there are a few to choose from and different criteria you can use for your selection process of the top UK banks. This article presents a detailed review of UK banks that fall into two different categories:

Consumers prioritize different things when searching for UK banks where they can park their money. For some, name recognition and size are important because they imply security. Others may seek out smaller UK banks that prioritize customer satisfaction and attractive perks in the form of higher interest rates.

Whichever selection criteria you prefer, we have rounded up the top UK banks that fall into one or both of these categories. 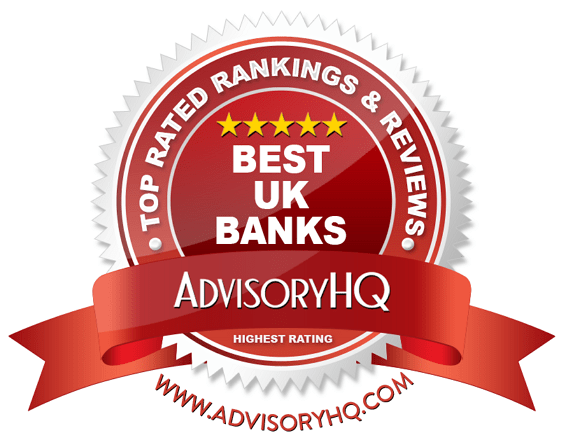 For a detailed review of the above top UK banks, including information on their most recent financial situation, growth, complaints, benefits, and history, click here: Detailed Review of The Largest British Banks.

For a detailed review of the above best banks in the UK, including information on their high yielding accounts, click here: Best UK Banks with Highest AER Yields. 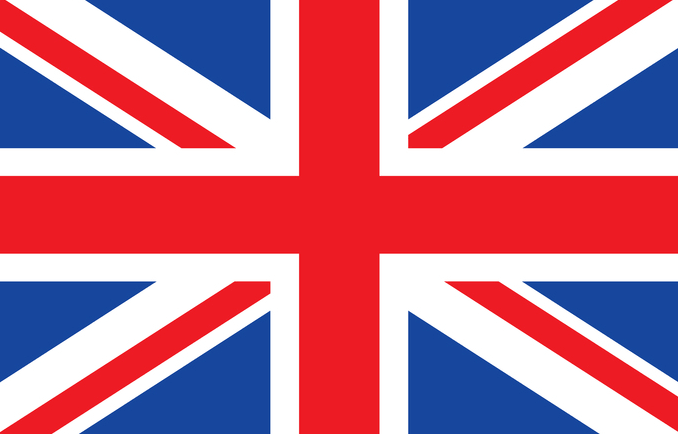 The statistics table below shows a trending bar chart of the total assets of the top 5 biggest UK banks. The chart shows each British bank’s total assets during the first half of the last couple of years. 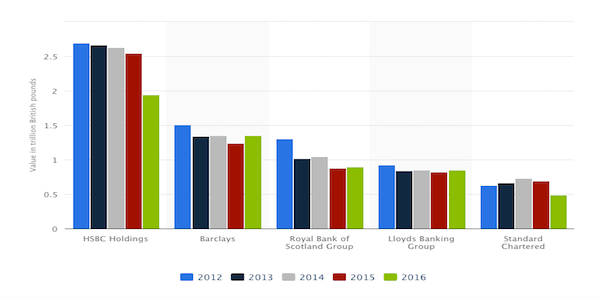 *Figures are in trillions of British pounds

Below, please find the detailed review of each firm on our list of the top UK banks. We have highlighted some of the factors that allowed these banks in the UK to score so high in our selection ranking.

HSBC – Largest Bank in the UK

HSBC is one of the largest banking and financial services firms in the world. It is also one of the top 5 UK banks.

HSBC was founded in the 1860s primarily to finance trading transactions between Asia (China and India) and the West (Europe).

The inspiration behind HSBC, one of the biggest UK banks, started with a man named Thomas Sutherland, a Scot who was working on a temporary contract in Hong Kong for the British Peninsular and Oriental Steam Navigation Company. Thomas discovered that there was pent-up demand for local banking firms in Hong Kong and on the China coast – banks that could provide similar banking facilities as could be found in London and other European cities.

In March of 1865, he worked with other parties to launch HSBC in both Hong Kong and Shanghai.

Soon after its formation, this UK bank’s operations expanded to surrounding regions and then to Europe and the Americas. In the later years of the 20th century and into the 21st century, HSBC moved from a regional-based UK bank to becoming one of the world’s leading financial services institutions.

Today, HSBC is headquartered in London. This UK bank is the number one biggest bank in the UK, with an estimated £1.94 trillion in total assets. It has a customer base of over 50 million people across every major economy in Europe, the Asia-Pacific, the Americas, the Middle East, and Africa.

HSBC operates through long-established subsidiaries, affiliates, businesses, and an international network of around 4,000 offices in 70 countries and territories.

HSBC’s latest Annual Report can be downloaded via their website.

Founded over 320 years ago, Barclays has expanded over the years. This UK bank now has an extensive global presence in Europe, the Americas, Africa, and Asia.

During this UK bank’s over 320 years history, Barclays has only had two head offices. One of which is located at 54 Lombard Street in London and the other at 1 Churchill Place in Canary Wharf. Each are located in one of the UK’s two main financial districts.

Barclays was the first bank in the world to launch through-the-wall ATM machines, at a time when ATMs were a rare novelty. The first of six ATM prototypes was opened at Barclays’ Enfield branch in 1967, and many more followed.

Barclays is the second largest bank in the UK, with an estimated total asset size of £1.35 trillion. This top British bank offers four core lines of business:

Unfortunately, Barclays is also considered one of the worst UK banks, based on the extremely high level of UK customer complaints it has received over the years. It has consistently been ranked as one of the worst current account providers.

Barclays latest Annual Report can be downloaded via their website.

RBS is committed to becoming a leaner, less volatile business that is based around its core franchises of Personal & Business Banking (PBB) and Commercial & Private Banking (CPB).

RBS provides serves about 18.4 million customers in the UK and Republic of Ireland. This UK bank boasts 1,425 branches and 4,646 ATMs.

As one of the biggest UK banks, RBS has an estimated £0.85 trillion in total assets and aims to be the best UK bank when it comes to service, trust, and advocacy.

At the height of the financial crisis, the UK government stepped in to bail out RBS, putting UK taxpayers in a position where they owned 81.14% of the bank. Over the last couple of years, RBS has made efforts to pay down enough of their public debt so that this UK bank can return to the private sector.

RBS’s latest Annual Report can be downloaded via their website.

Based on total asset size, Lloyds is ranked as this year’s fourth top UK banks. Lloyds Bank is part of the Lloyds Banking Group, which was formed in 2009 following the acquisition of HBOS by Lloyds TSB Group. This UK bank has £0.85 trillion in assets.

Unfortunately, the acquisition brought over billions of bounds worth of highly toxic assets to the balance sheet of the combined conglomerates.

At the height of the financial crisis, the high amount of toxic assets led to Lloyds Banking Group’s state of insolvency, causing it to be nationalized by the UK government and leaving UK taxpayers in ownership of an over 43.4% stake in the bank.

In January 2017, it was reported that Lloyds Bank is expected to return to private ownership a few months into the new year.

Lloyds Bank’s most recent Annual Report can be downloaded via their website.

Standard Chartered, this year’s fifth top UK bank, is a global banking firm headquartered in London, UK. They have a global workforce of 80,000 people and £0.49 trillion in assets.

Standard Chartered was formed through a union of two major banks: Standard Bank of British South Africa and Chartered Bank of India, Australia, and China. This top UK bank has played a prominent role in facilitating and profiting from trade between Europe, Asia, and Africa.

Standard Chartered’s most recent Annual Report can be downloaded via their website.

For many people, institutional grandeur and global name recognition may be vital for choosing a bank. But for others it comes down to great customer service, attractive rates, and low fees. Now that we have covered the top 5 largest banks in the UK, below is a high-level overview of the best banks in the UK based on the percentage yields that you can earn from depositing money in these banks.

Lloyds Bank is number 3 on our list of best UK banks based on its Club Lloyds current account, which offers 2% AER yield.

There is no monthly fee so long as you deposit £1,500 a month into the account. Even if you can’t maintain that balance, the monthly fee is only £3.

Nationwide is another bank on our list of best UK banks based on the high AER yield that it pays on its FlexDirect current account.

Similar to the AER yield offered by TSB’s current account, Nationwide’s FlexDirect current account gives you 5% AER (4.89% gross p.a.) for the first 12 months on balances up to £2,500. 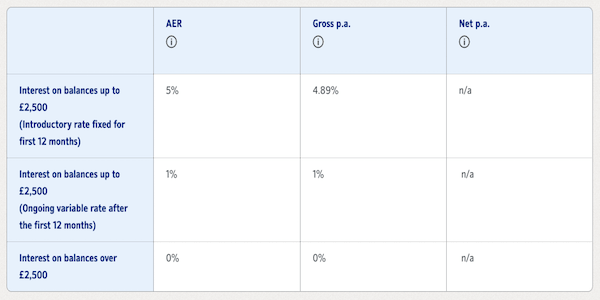 Santander is number 4 on our list of the best banks in the UK based on the yield that it pays on its 123 current accounts.

The bank, which was established in January of 2010, has its head office in the London Borough of Camden. Santander was formed when Abbey National was combined with the banking divisions of Bradford & Bingley and renamed as Santander UK. 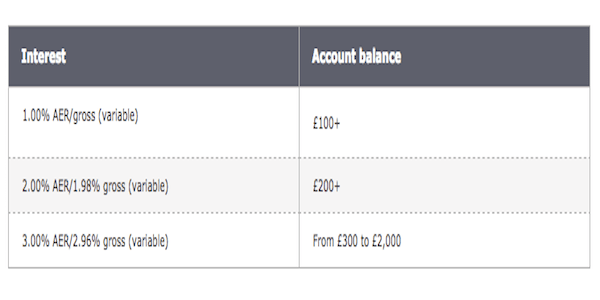 TSB is rated as one of this year’s best UK banks based on the many high yielding accounts that it provides.

You receive an a great interest yield of 3% AER variable interest on balances up to £1,500. To be eligible for this account, you must be 18 or over and be a UK resident. Also, you are restricted to only opening one account in your sole name but can open another Plus account in joint names.