Since its birth in the 1990s, online investing has boomed. Nowadays, there are thousands of registered brokerages. And there are changes happening all the time. Prophets of doom predict a massive cull of the U.S. brokerage industry because of stricter regulation, rising costs, and robo-trading. The new disruptors even offer no-commission trading on your mobile.

But some of the players that surfed in on the wave of the nineties are still going strong. In fact, if you have tried your hand at investing even a little money, chances are you have heard of Fidelity, Charles Schwab, Scottrade, E*TRADE or Ameritrade –the “big five” online (or discount) brokerages.

In this article, we analyze the good and bad sides of E*TRADE vs Ameritrade and provide advice on both. At the end, we choose a winner based on the results of several rounds of comparisons.

To start off the Ameritrade vs E*TRADE duel, some general bits of information are in order. Before deciding whether to use the services that E*TRADE or Ameritrade have to offer, you should know they are both very popular, which shows at least some level of reliability.

As for the companies’ own finances, the most recent results favor E*TRADE. In the first quarter of 2016, E*TRADE reported 3.3 million brokerage accounts and profits four times greater than the year before, plus its credit rating rose by eight notches. TD Ameritrade also reported a rise, but nothing that spectacular.

If we look for E*TRADE or Ameritrade at NASDAQ, things get a little strange. NASDAQ’s list of broker partners includes E*TRADE but not TD Ameritrade. What is more, the “More Brokers” list, comprising 37 brokerages, includes TD Ameritrade as the only broker with neither minimum deposit nor commission data. One would think they are a no-name third-tier broker.

When we check out Investors.com, however, the situation is quite different, and Ameritrade vs E*TRADE leans in the favor of the former. TD Ameritrade is included in their most important Top 5 list, “Top Overall Customer Experience,” with half a dozen characteristics that are singled out as top in class. 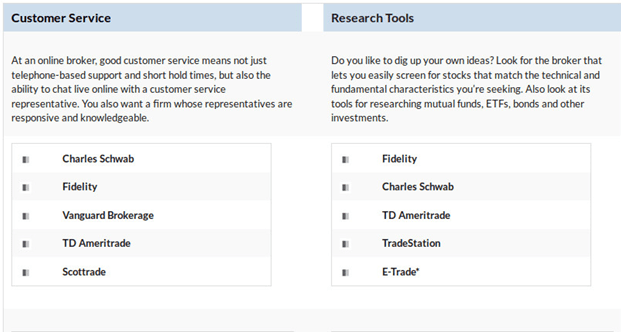 Still, it is not like they forgot about E*TRADE. The broker managed to snatch a spot in “Site Performance,” “Research Tools,” “Investment Research,” and “Portfolio Analysis and Reports.” But TD Ameritrade manages to give E*TRADE a sound beating here, too. Out of the dozen Top 5 lists, TD Ameritrade has a spot in seven of them.

To sum up our E*TRADE vs Ameritrade introductory rounds: the financial future looks bright for E*TRADE, but Ameritrade is stronger in terms of overall performance.

Don’t stop reading, though. There are several other indicators that could swing your preferences toward E*TRADE or Ameritrade depending on your trading interests.

To compare the two brokerages, we will use the amazing table provided by Barron’s in several parts of this article. The table’s level of detail is stunning. In fact, we advise you spend half an hour studying all the categories; it is well worth it.

In case you wonder about who is the best among all of them, the overall winner of the Barron’s rankings is a brokerage veteran: Fidelity.

Looking only at Ameritrade vs E*TRADE, we see that both have four stars. However, TD Ameritrade comes out on top because it has a better position overall. It is fourth, while E*TRADE ended in the lower half of the table, in ninth place.

As for specific up sides, Ameritrade was the best online brokerage for long-term investing and for novices. E*TRADE is also in top five in both categories, but in the fifth and third place, respectively.

But a look at E*TRADE or Ameritrade in the cost tables should dampen your enthusiasm for either of them. Ameritrade was the most expensive brokerage for frequent traders, followed by E*TRADE. It is almost the same for occasional traders: the two companies are tied for the second most costly brokerage. 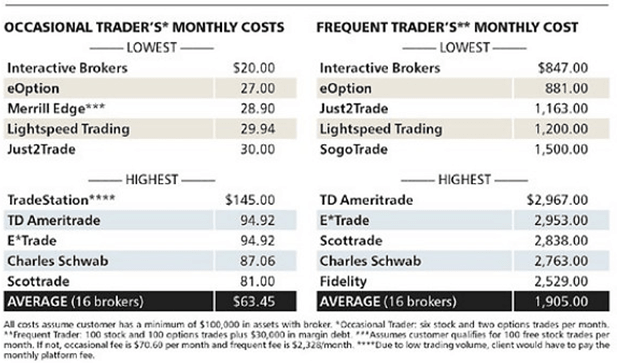 Despite its leading position in the most notorious category, this general round of E*TRADE vs Ameritrade goes to Ameritrade. Still, there are several other particulars to be considered.

Mobile trading is all the rage nowadays, so any half-decent broker must support at least a few mobile operating systems. The Ameritrade vs E*TRADE analysis shows that both have iOS, Android, and Windows support, not to mention tablet-specific apps.

Ameritrade boasts its “thinkorswim”; in fact, this mobile trader is the #1 trading app in the App Store.

What is more, both companies are among half a dozen major brokerages supporting the Apple Watch. If you have the E*TRADE or Ameritrade watch app, however, it does not mean you can trade on the watch itself. It just sounds an alarm so you can check the trading event on your iPhone.

With support for mutual fund trading, either E*TRADE or Ameritrade are a good choice for mobile. There is one feature that gives Ameritrade the advantage: it lets you chat with its representative on the phone while sharing your display to show them where you need help. Neat!

On the other hand, E*TRADE lets the mobile users compare the market averages with their personal portfolio, which is a very interesting option. This round of Ameritrade vs E*TRADE is a tie, although we do lean toward E*TRADE because its app is really easy to use. 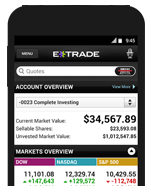 Trading fees will make or break an online brokerage. But there are several categories to consider. To give an overview of Ameritrade vs E*TRADE fees, StockBrokers (which gave both companies four and a half stars) has created a neat table. 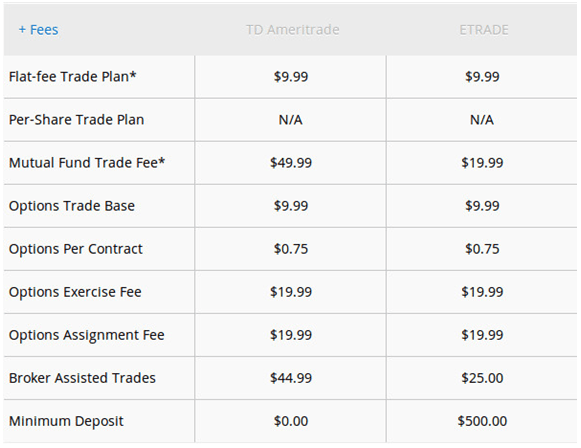 For most fees, it does not matter whether you pick E*TRADE or Ameritrade since they are the same. Ameritrade makes things easier for first-timers by not asking for a minimum deposit.

On the other hand, once you start trading, its much higher fees for broker-assisted trades and mutual fund trading might put you off. Also, its margin rates are consistently higher.

This round of E*TRADE vs Ameritrade goes to E*TRADE, which has lower fees overall.

Penny stocks, or over-the-counter (OTC) stocks, are cheap stocks trading for less than $5 per share. Since they are obscure and risky, NerdWallet offers advice on what to watch out for. What we are interested in, however, is their choice of the best brokerages. The Ameritrade vs E*TRADE rivalry is balanced yet again, as each company has been the co-winner in a category. 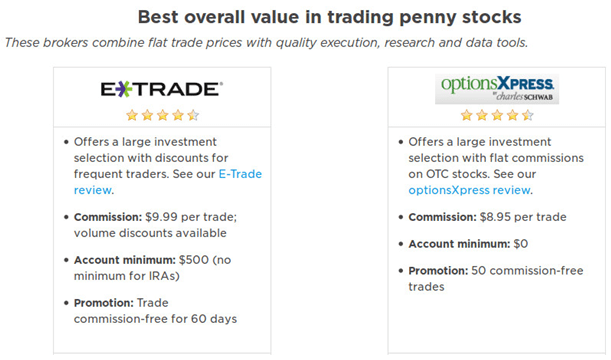 E*TRADE provides the best overall value in trading penny stocks along with optionsXpress. E*TRADE has a higher initial commission, but it is cheaper for frequent traders.

TD Ameritrade, on the other hand, is on par with Charles Schwab as the best trading platform for penny stocks. 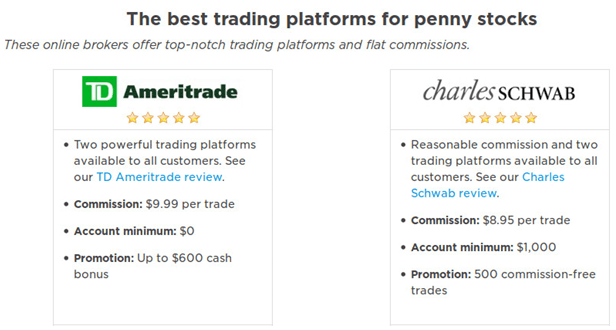 The winner of this round of E*TRADE vs Ameritrade depends on your priorities: if you invest often and want to get the most trades for your money, you should pick E*TRADE; if you believe a superior trading platform will help you invest better, pick Ameritrade.

There is a reason why Ameritrade snatched a place in the “Top Overall Customer Experience” table of Investors.com: its platforms are a wonder to behold.

Of course, you can trade quite comfortably on either E*TRADE or Ameritrade platforms. But the Ameritrade offer of platforms is really impressive, with a huge number of possibilities.

You can use several platforms in sync without losing your way. They include a vast array of different solutions, from thinkorswim (for more demanding and research-oriented investors) to the TD Ameritrade Website (for longer-term trading), with TradeArchitect in between.

While lagging behind in this Ameritrade vs E*TRADE round, E*TRADE is not without its charms. Its offer could be especially attractive to frequent traders. The E*TRADE Pro platform provides valuable tools, such as Strategy Optimizer (displaying custom option strategies), Options Analyzer (testing scenarios), and Options Screener (sorting out stocks).

Since this is arguably the most crucial feature of any trading platform, we will look at the Ameritrade vs E*TRADE research options in more detail.

Third-party report providers are the lifeblood of any trading research. What really matters is diversity. And while E*TRADE provides a well-designed interface to four sources (Standard & Poor’s, Thomson Reuters, SmartConsensus, and MarketEdge), Ameritrade is better simply because it has seven sources, including the all-around popular Morningstar.

This leaves no doubts about the winner of this E*TRADE vs Ameritrade round: Ameritrade. 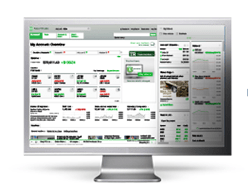 E*TRADE’s chart functions are very flexible, and there is a wealth of options that you can customize and menus that you can reposition.

A nice feature of Ameritrade is the Social Signals tab, where you can check the tweets related to a specific brand or metrics such as the sentiment score.

All in all, Ameritrade seems to provide a richer offer in this Ameritrade vs E*TRADE round.

There are some features that are particular to either E*TRADE or Ameritrade and should be mentioned.

Unlike other online brokerages, E*TRADE includes a physical banking offer. It offers debit cards and checking accounts without ATM fees.

Ameritrade has the annual thinkorswim Challenge, which promotes investment education in American colleges by making their teams participate in a competition. Last year’s winner was the Gettin’ Paper team from South Missouri State University. 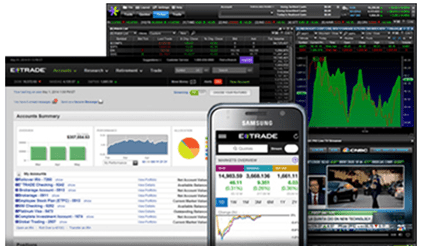 E*TRADE vs TD Ameritrade: In a Nutshell

This brings us to the end of our Ameritrade vs E*TRADE analysis.

To sum up our findings, you should pick Ameritrade if: 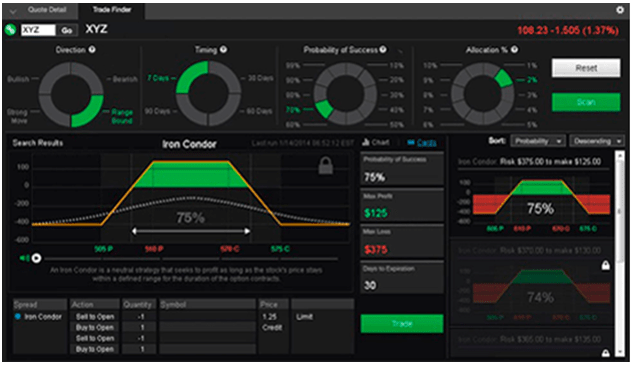 And you should choose E*TRADE if:

However, both companies are in the more expensive tier among the major online brokerages, so if you are looking for the cheapest option, you should choose neither.

Ameritrade is the winner of our E*TRADE vs Ameritrade comparison because it has won most of our rounds and is considered the overall better option by reputable sites like Barron’s and Investors.com.

Still, both online brokerages offer a big range of high-quality services, and you will not go wrong with either E*TRADE or Ameritrade, so you should consider the particular benefits that work best for you.