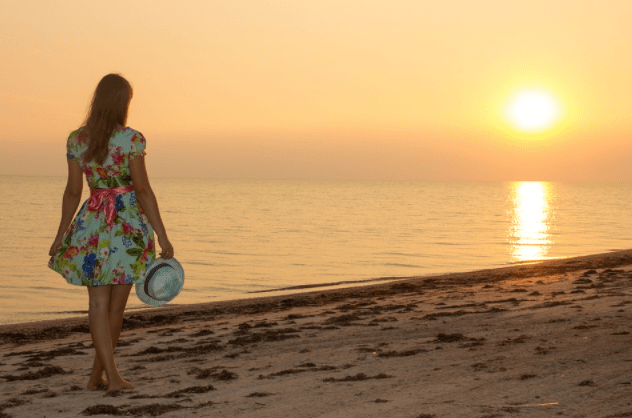 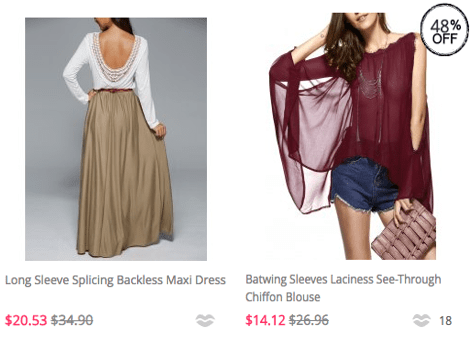 Stunning outfits for insanely cheap prices — that’s what you can find at Nastydress.com and on the NastyDress app. It can be hard to resist the urge impulse buys when you see prices like that. Those deals are too good to pass up — or are they too good to be true?

NastyDress is notorious for its remarkably low costs, but is NastyDress legit? Can prices that cheap for products that tempting be real?

NastyDress.com is a global online shopping destination from the UK and their website was founded in 2011. NastyDress considers itself home to “today’s most exciting and edgy fashion apparel,” with free shipping on every item. The website’s “About Us” page promises a “shopping experience that’s 100% safe and secure.”

NastyDress sells men’s and women’s clothes, shoes, accessories, lingerie and more. Much of their clothing comes from somewhere in the UK or from China. There are a number of other websites, including RoseGal.com, SammyDress.com and DressLily.com, that offer very similar clothing choices for comparably irresistible prices.

A BuzzFeed Analysis showed that eight different companies alongside NastyDress and the aforementioned websites are all linked to one e-commerce company from China that made more than $200 million in sales in the year 2014. These websites definitely don’t lack a customer base, but that still leaves us with the question, “Is NastyDress legit?”

Imagine you’re browsing your social media when you come across an advertisement from NastyDress.com. It pictures a beautiful young woman wearing a dazzling purple dress. At the bottom of the photo in bold red font, it displays a shockingly reasonable price, boasting that the original price was almost double. You’re filled with excitement — you must have that dress.

You go to the NastyDress website and see that all of their products are affordable, so you load up your virtual shopping cart and proceed to check out to discover that shipping is free! All you need to do now is enter your credit card information and wait for your brand new dress to arrive. It’s that easy — or at least it seems so. 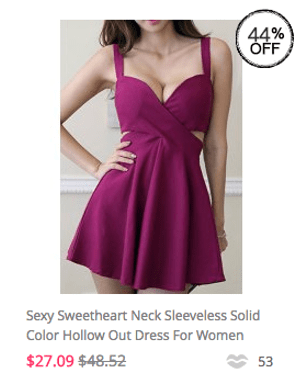 NastyDress promises easy shopping, low prices, and quality products. They use beautifully photographed advertisements to lure shoppers to the site (check out this article that discusses “photo snatching” — when companies steal advertisement photos from other stores).

Don’t Miss: DHgate Reviews – Is It Safe? Reliable? What You Should Know about Dhgate

The NastyDress website is impressively easy to navigate. Browsing the products is a breeze using both a computer and the NastyDress app. Once the shopper has selected an apparel item that they like, they are given a detailed sizing chart. The sizing chart offers the product’s measurements in both centimeters and inches for the bust, waist, hips, sleeve length, and more depending on the article of clothing.

It even offers a very descriptive “product details” section that includes the material, style, season, etc. of the product. These steps can shore up the customer’s confidence in the site. Judging solely by the looks of their website, it seems that NastyDress is legit.

The website also provides abundant resources for getting in touch with the company should a problem arise. They even have a politely worded disclaimer that gently reminds customers that colors and product sizes may not be accurately displayed on the website.

Under “Company Information” the website walks the customer through what customer information they collect and what they use it for. They promise a very strict privacy policy.

As far as payment, shipping and handling, order status, warranties and returns, the website doesn’t skimp out. NastyDress appears to maintain a very transparent relationship with their customers.

They assure visitors to the website that customer satisfaction is their number one priority. With all this, how can NastyDress be a scam?

By sharing photos of themselves wearing their purchases placed neatly next to the website’s advertised image of the product, they are rewarded coupons or “N points,” a NastyDress point system that earns shoppers deals and discounts. What isn’t there to trust about that? Let’s take a look at some NastyDress reviews. 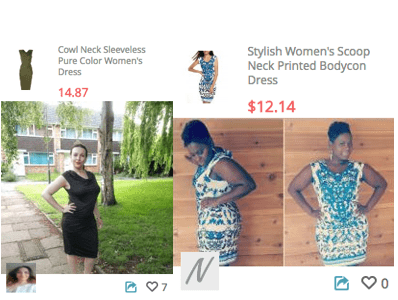 While it’s often been said that unhappy customers are significantly more likely to post a review than happy customers, it’s hard to combat the negative reviews.

The biggest complaint among negative NastyDress reviews appears to be that many customers do not receive their orders despite payment being taken from their bank accounts. Though it’s always a risk to shop online, a number of customers find it hard to believe there can be so many slip ups. Check out these real-life NastyDress reviews:

I placed an order September 2015. I have tried to contact them with no luck. I still don’t have my order and it’s been 7 months since I placed it. I will never be ordering anything online again.”

Wow! I spent $175USD ($220AUD) and they arrived fast I will give them 1 star for that. BUT THAT IS IT! The clothes were the cheapest, most disgusting things I have ever seen…I tried 1 shirt on and it tore just like a tissue! [And] the sizing… OH MAN! As per their website an XL should fit a small adult, I am slim…WHAT A JOKE! The sizing is way off!

Negative NastyDress reviews have a common theme of poor quality of material, incorrect colors and sizes, and lack of response from customer service representatives. Despite the website’s gentle disclaimer on advertised images, many shoppers feel like NastyDress is scamming them and that customer satisfaction is not at all their first priority.

Take this example that was featured on HuffingtonPost.com written by blogger Lindsay Ferrier. 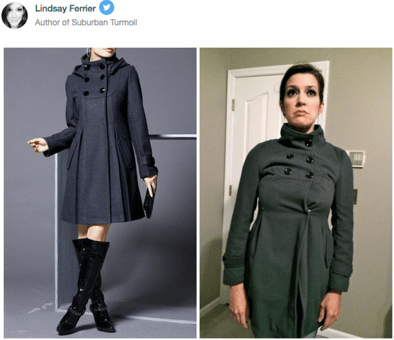 After doing a certain amount of research, Ferrier decided that despite negative NastyDress reviews, NastyDress is legit, and she ordered a number of products from the website, but upon their arrival, not a single one fit.

She claims that she even ordered a size larger for each product just to “be on the safe side,” yet she ultimately gave all of her purchases to her 10-year-old daughter, who wore them much better.

In the photo above, Ferrier tries on a coat that was supposed to be a size larger than what she normally wears. Also, the coat was advertised as “woolen” but it turned out to be fleece. Immediately Ferrier posted a NastyDress review online. Check out Ferrier’s full blog for the details on her experience with NastyDress.

Ferrier, along with several other NastyDress reviewers, claimed that her purchases came with holes and lose strings. Despite the website’s convincing concern for customer satisfaction and service, many disappointed customers seem unable to reach anyone for help. A NastyDress customer service representative comments on all negative NastyDress reviews, but it appears to be nothing more than a copied and pasted response.

Despite the large number of positive NastyDress reviews, these poor real-life customer experiences make it harder to believe that NastyDress is legit.

While websites like these have an overwhelming number of dissatisfied NastyDress reviews, there is no denying the positive ones out there. On these review sites, a handful of four- or five-star ratings pop up with comments such as, “best online shopping experience” or “great store, low prices” and “completely satisfied.” Also, don’t forget the photo gallery of happy customers mentioned earlier. 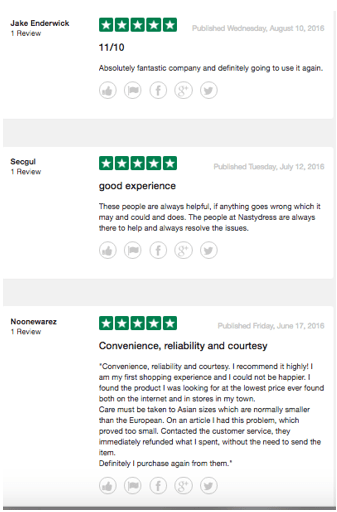 Is this a fluke? Maybe NastyDress is legit and safe? Some shoppers researching NastyDress wonder if these reviews are posted by the company itself.

Often times it’s been said that companies may create monetary incentives for reviewers to leave positive feedback (see article “For $2 a Star, an Online Retailer gets Five-Star Product Reviews”). While this is entirely possible, there is no way for us to prove such a statement. So does the good outweigh the bad? Is NastyDress legit?

Is NastyDress a Scam? – Our Opinion

While there are both positive and negative NastyDress reviews floating around the internet, it’s hard to develop a concrete answer. We wouldn’t go so far as to say NastyDress is scamming its customers, but it seems that there is plenty of room for improvement in NastyDress’s systems.

There has been research done on NastyDress.com and its sister sites including DressLily.com, RoseGal.com, and more. An in-depth analysis by BuzzFeed tells its readers all about the e-commerce company that runs these websites.

We will concede that it comes down to chance when ordering from NastyDress.com and when using the NastyDress app, as the dozens of positive NastyDress reviews and the millions of likes on their Facebook page show that there are satisfied NastyDress customers out there. Is NastyDress legit? Probably, but there are also plenty of trustworthy shopping websites that don’t require the customer to leave so much to luck.

Always keep in mind the risks that come with shopping online. Online retail revenue saw a 13% year-over-year growth rate for the year 2014. It’s not uncommon to shop online anymore.

It has become such an accepted form of shopping that many people forget the risks that come with exchanging money over the internet. Check out this Forbes article about the risks of shopping online if you’d like to learn more.

We hope that our NastyDress review has given you some insight on NastyDress.com and that you now feel like you can confidently make your own judgement on whether or not NastyDress is legit.