Mercari App Reviews | Is The Mercari Selling App Safe? What You Need to Know

Should You Take a Chance Buying or Selling on the Mercari App?

Mobile apps have made our lives much easier in many ways. Need to check the weather forecast? Just pull up an app. Want to sell some clothes that you don’t wear anymore? You can do that on an app too.

The Mercari selling app claims that it makes selling your unwanted items as easy as uploading a few pictures and a description. In this Mercari app review, we’ll discuss if you can really clean out your closet or attic right from your phone.

We’ll also look at buying on the Mercari app. Is it true that bargain hunters can shop all kinds of unique products, and find discounts on new retail items from major brands like Nike and Coach?

Lastly,  just how safe is it to use Mercari? Is the Mercari app legit or do you have to worry about scammers? You may have heard stories about Mercari complaints online and wondered if it was worth it to try this mobile app at all.

We’ve taken a deep dive into all of this, as well as many Mercari app reviews on both the Apple App Store and Google Play, to bring you answers. 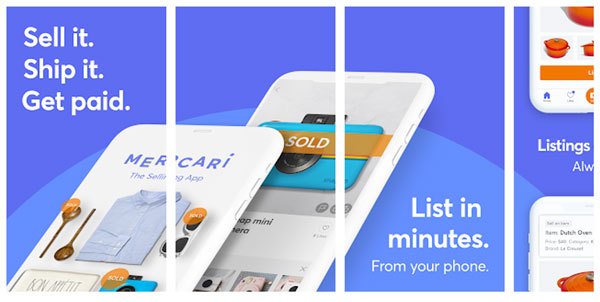 In this AdvisoryHQ Mercari app review, we’ll go through burning questions like:

Before you start buying or selling on the Mercari selling app, it’s important to know what you’re dealing with, so you don’t get scammed!

What is The Mercari App?

If you’re not familiar with Mercari, you might ask, “What is the Mercari app?” It’s a mobile app that was released in 2013 as an online marketplace connecting buyers and sellers.

The idea behind the technology is that you can use the Mercari app to list products that you want to sell, then once they’re sold, you just ship the item to the buyer and get paid. It’s designed to be an easy process for both the buyer and the seller.

The company behind the Mercari selling app is headquartered in Japan and also has offices in the United States.

Is the Mercari App Free?

Do you have to pay anything to use the Mercari selling app? Our Mercari review found that for shoppers, there is no cost to use the app. For sellers, the Mercari app is also free to use for listing items.

However, although sellers can list as many products as they’d like for sale in the Mercari app for free, once an item sells, there is a flat 10% fee. You also have to pay to ship the item to the buyer.

The fact that the company is upfront about the seller fee and allows listings for free is a positive sign for those asking, “Is Mercari app legit?”

In certain Mercari complaints that we’ve seen online, sellers have complained about a $2 fee when they want to immediately transfer funds to their debit card.

If you want to transfer your money for free from the Mercari selling app to your bank account, you can do a direct deposit transfer that takes 2-5 business days for amounts over $10. If it’s less than $10, there is a $2 fee.

How Do You Get Your Money from Mercari?

A common question we found when researching for this Mercari app review was from users asking how they get their money from Mercari when an item sells.

There are a number of steps to go through, which causes some users to wonder, “Is the Mercari app legit?” because they have to wait so long to get paid. There are also Mercari complaints related to not getting paid because a customer said they returned an item, but it was never received by the seller.

So, how do you get your money from Mercari? Here is the process when using the Mercari selling app:

Related: Is the Wish App Legit & Safe? A Scam?

When you first see the ratings on the Apple App Store and Google Play, you might no longer wonder, “Is Mercari app legit?” because both ratings are very good.

We have taken a deeper look into these app reviews to bring you some of the common Mercari complaints and praise. Is the Mercari app legit? We’ll learn more below!

Overall, when discussing the Mercari selling app itself, users say that the app works well and makes it easy to buy and sell things online.

In one Mercari app review, the reviewer said they had an item listed on eBay for 6 months, and within an hour of posting it on the Mercari selling app, it sold.

Main areas of praise from Mercari reviews are:

When giving a review about the Mercari app itself, most users didn’t have any major problems. There were just a few issues mentioned, like a delayed messaging system, or that saving a listing draft didn’t save photos.

What is the Mercari App?

One user did mention the Mercari selling app crashing, but we didn’t see this as a problem mentioned by many other users.

Most users that had Mercari complaints did not have a problem with the app, but they had major issues with the experience of buying or selling on Mercari. They also mentioned terrible customer service from the company.

Main Mercari complaints in the app reviews are:

Popular Article: What is the letgo App? Is it the Best App to Sell Stuff Locally?

Is the Mercari App Legit?

How safe is it to sell and shop on the Mercari selling app? Is the Mercari app legit? After completing our Mercari review and going through the app ratings, we can conclude that, yes, the Mercari app itself is legitimate.

The company behind the Mercari selling app is a public company with offices in Japan and the U.S. Most of the negative Mercari complaints discussed scammers using the platform, either buyers or sellers, but not specifically being scammed by Mercari itself. While any online marketplace can attract scammers, there did not seem to be any specific issues with Mercari scamming its users.

Now, if you’ve asked, “What is the Mercari app” and are concerned about security, you might find that you indeed have an issue with a transaction. Because Mercari is an online marketplace, you don’t know if the person you’re selling to or buying from is trustworthy or a scammer.

We found that users noted having mixed experiences with both purchases and sales. Some of them go off without a hitch, but others had issues, such as buyers requesting a refund and never sending the item back, or sellers shipping defective items.

So, while the Mercari app is legit, the person at the other end of the transaction may not be. And from the looks of many Mercari app reviews, there’s a good chance you won’t get any help from customer service.

Read More: What You Need to Know About Apps Similar to Wish

Conclusion: What is Mercari App? Is it Safe? Legitimate?

Those wondering about the experience with the Mercari selling app will be happy to know that the app itself is very easy to use, according to many users. Some even note being able to make hundreds of dollars from unwanted items in their closet.

The drawbacks are that it’s hit or miss whether you’ll have a good or bad experience because you’re dealing with strangers, and the company doesn’t sound like they help much when it comes to problems with transactions.

If the customer service didn’t have such poor ratings when we went through the Mercari complaints, we would feel a little better about the Mercari selling app, because it does have high reviews on both the Apple App Store and Google Play.

But many of those high ratings can be attributed to the fact that the Mercari app itself works very well and is user friendly. When it comes to how safe it is to use the app, the poor customer service brings down their overall score in our estimation, which is why we’ve rated the Mercari selling app with 3 stars.