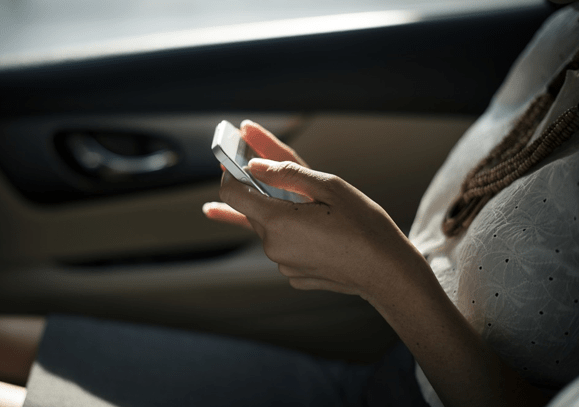 Learning how to budget has always been an important part of managing your finances. It’s a great way to monitor your spending and create mindful saving towards financial goals, like buying a house, taking a vacation, or putting away money towards retirement.

At the same time, the poll also showed that more Americans are starting to use online budgeting sources instead of traditional pen and paper methods. Part of this is due to the increase in online budgeting tools and apps, increasing the convenience and accessibility of budgeting.

One such app is EveryDollar, the Dave Ramsey app which promises to help users “live more and worry less” by using the best budgeting tools.

This is undoubtedly a great promise, but how do you if the EveryDollar app lives up to the hype?

Does EveryDollar really have the best budgeting tools for a manageable, long-term budget? Should you download the EveryDollar app to create your own personal budget?

Before you rush to your mobile store and download this popular Dave Ramsey app, a good way to assess its effectiveness is to look at EveryDollar reviews from actual users.

In our EveryDollar review, we’ll look at the best and worst EveryDollar app reviews from both Apple and Android users to help you evaluate whether this popular Dave Ramsey app is the right fit for your budgeting needs.

There are over 1,900 EveryDollar reviews on Google Play, giving the EveryDollar app a total rating of 4.1 stars.

This app saves time by having many of the everyday budget items already available. The budget section being right next to the spent section makes it easy to toggle between the two.

This app has made budgeting so simple, accurate, and fun. You can make it work for your style. Highly recommend using this tool.

It’s worth mentioning that many positive EveryDollar reviews come with a few criticisms from users. For example, in her 4-star review, user Priscella Maria says:

I really like the app, it’s pretty useful and [pretty] good. But i think they should be able to adapt the 7 baby steps and the way you put in how much debt you have and keep track of it. Just like the web version. It could be pretty useful to have it mobile so you can keep track of all the steps without really needing a [computer] all the time. 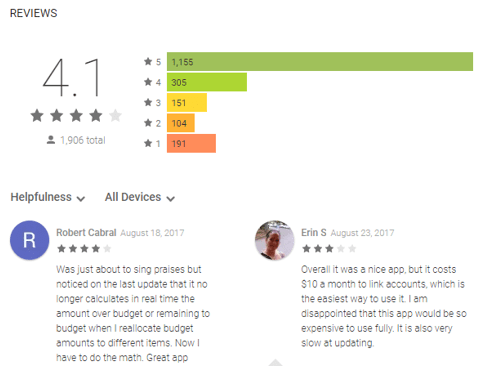 At $99 each year, the EveryDollar app does come at a significantly higher fee than competing budgeting apps—and EveryDollar reviews are quick to point out the high price.

Many negative EveryDollar reviews criticize the pricing structure of the EveryDollar app, questioning whether the high price is worth it.

Overall it was a nice app, but it costs $10 a month to link accounts, which is the easiest way to use it. I am disappointed that this app would be so expensive to use fully. It is also very slow at updating.

Good app, but $10/month to get the best part of the app, bank access, is highway robbery. In Dave Ramsey’s words, that’s a whole lot of dumb.

There are also a significant number of negative EveryDollar reviews that address issues with the overall functionality of the EveryDollar app. This includes occasional glitches, difficulty opening the app, or being unable to carry over specific budgets from one month to the next.

One such EveryDollar review says:

Doesn’t keep track of my budget or spending at all. It’s always wrong, it says I have more money than I actually do, and I have to do my own math to figure everything out anyway. Useless.

There are over 900 EveryDollar reviews on iTunes, giving the EveryDollar app an overall rating of 4.1 stars.

My wife and I love the every dollar app. It’s has truly made our debt free journey so much easier. We are every dollar plus users and it has its times but the customer service is top line and they get the issues figured out and taken care of in a matter of hours! If you and your spouse are looking for the thing to help you get on the same page and win with money this is the app for you! Thank you to Dave and his team for this wondering life changing app!!! 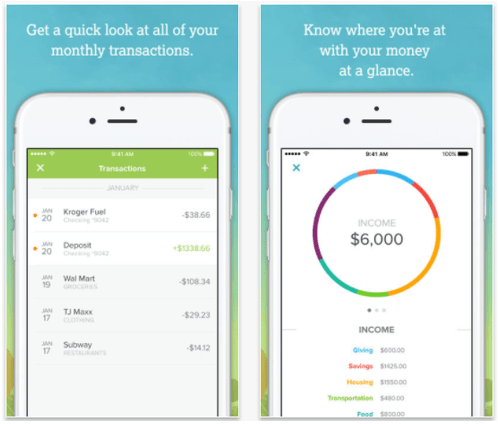 My husband and I recently started using every dollar and it has been great. I absolutely love it. I just wish there were more features for scheduling bills and helping to figure out how the budget should best be divided out over the month.

The “due date” option was great on my phone, but it’s very frustrating that it isn’t available on my laptop. There were a few other things I noticed that were available in one format but not the other. The two (app and computer interface) should be identical. And due dates, with the ability to use it to plan out which budget items come out of which paycheck, would be an incredibly helpful feature.

For example, one EveryDollar reviewer says:

I am using the free version so maybe I should expect issues, but I have constant issues with it not accepting my password… I may not be the most technically astute person but when I spent more time troubleshooting than actually being able to use the app it’s not worth it…even if it is free.

Conclusion: Is the EveryDollar App Worth Downloading?

Based on EveryDollar reviews, there are plenty of users who are satisfied with their service.

The EveryDollar app has relatively high ratings from both Android and iTunes users, with many EveryDollar reviews praising the app for its efficiency when creating a household budget.

At the same time, critical EveryDollar reviews raise significant questions about the reliability and functionality of the EveryDollar app, bringing into question whether EveryDollar does have the best budgeting tools.

EveryDollar reviewers are quick to point out that although a free version of the EveryDollar app exists, users have to pay for the premium version to really get the most out of the budgeting app.

If you admire Dave Ramsey and want to use the EveryDollar app to accomplish his steps to financial wellness, this popular Dave Ramsey app is the right choice for you.

On the other hand, if you’re looking for an app that doesn’t cost an arm and a leg—and has a better track record for reliability and efficiency—you may want to consider downloading Mint, Personal Capital, or YNAB instead. 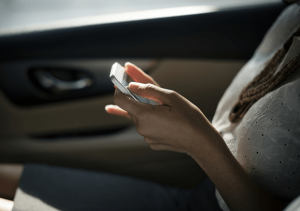