During the fall of 2008, the so-called “best of times” started catching up with those that lived it.

America faced a financial crisis of epic proportion that resulted in millions of lost jobs, and trillions of dollars in lost personal and corporate wealth.

The cause was a financial environment that:

The immediate result of living the “best of times” to their fullest, totally unchecked and barely regulated, was a slew of failed corporations and financial institutions.

There was a liquidity crisis that was so severe that financial institutions refused to lend to each other, lest the borrowing institution defaulted on their obligations.

Corporate creditors and ordinary borrowers found it extremely difficult to secure financing and lines of credit from banks and mortgage companies.

To immediately halt a ripple effect from destabilizing the country’s entire economy, Congress passed the Emergency Economic Stabilization Act of 2008 (EESA) which, through the Troubled Asset Relief Program (TARP) enacted on Oct. 3, 2008, empowered the Treasury to acquire up to $700 billion of mortgage-backed securities and a variety of other assets from a number of “troubled” institutions.

This was a time when, amongst other high-profile activities:

The primary objective of TARP was to prevent contagion of the crisis by injecting funds to restore liquidity into the financial markets.

Unless something like TARP was implemented quickly, confidence (domestic and international) in America’s financial institutions could wane, ultimately leading to even deeper, unresolved issues.

THE BIRTH OF DODD-FRANK

While the 2008 initiatives, such as the Emergency Economic Stabilization Act and TARP, were reactive responses to deal with an ever-deepening financial crisis, they were by no means considered comprehensive enough to prevent the same situation from repeating itself.

A more systemic review of the crisis revealed that far deeper reform of the entire financial system was needed to address the underlying causes of the 2008 crisis. 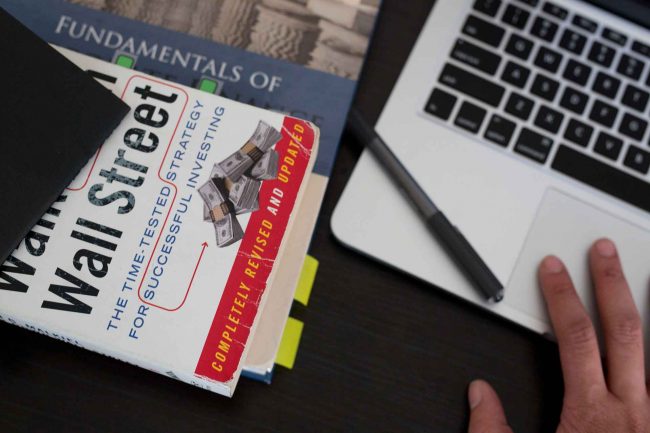 On March 15, 2010, Senator Christopher J. Dodd (D-CT) introduced a bill in the Senate, which was passed approximately two months later, on May 20. U.S. Representative Barney Frank (D-MA) revised the bill, which then received House approval on June 30, 2010.

In tribute to the efforts of these two lawmakers to reform the ailing financial industry, the bill was named the Dodd-Frank Wall Street Reform Act.

The Act became law on July 21, 2010, when President Obama signed and made it the law of the land.

The Dodd-Frank Act has been dubbed the “Wall Street Reform Act.” In simple terms, it:

As indicated above, this is a “simplistic” Dodd-Frank Act summary.

Buried within the Dodd Frank Act’s 2,300+ pages and 400+ mandates and rules are a number of clauses that seek to either introduce new, or change existing laws governing a broad spectrum of activity across America’s financial industry.

However, the points highlighted above are the key focus areas of The Act.

This publication seeks to give readers a high-level understanding of The Act, and describe (in the simplest terms possible) what The Act does, how it will be implemented, and what impact it is likely to have on America’s financial institutions.

As can be imagined, any piece of legislation this complicated requires a great deal of planning, thought and effort to implement, and the 2,319 page Dodd Frank Act is no exception.

While some provisions of the Act (e.g., the Volcker Rule) was set to become law shortly after the Act became law, the following table lists the Estimates of Rulemaking By Agency that will be required before many other components are implemented. 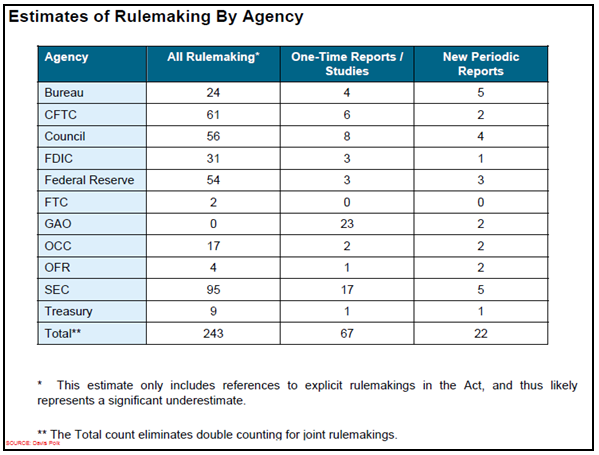 As can be seen from the rule-making estimates required, there are over 240 rules that are explicitly required for the Act to be fully implemented.

However, regulatory experts agree that, once the true law-making impact becomes clear, this figure is likely to more than double.

While The Act has laid out a regulatory framework for implementation, it has left the actual implementation mechanics in the hands of a number of existing agencies, including the US Securities and Exchange Commission (SEC) and the Federal Reserve (the Fed), as well as newly-created agencies including the Financial Stability Oversight Council (FSOC) and the Consumer Financial Protection Bureau (CFPB).

It is these bodies that will be involved in proposing, drafting, seeking approval, and ultimately implementing the slew of rules (new and updated) required.

The Dodd Frank Act implementation timeline presented above shows a high-level Gantt chart of the key rule-making, transition, and effective dates for each of the major components of the Act.

While it is estimated that full implementation will not happen until 2018, some experts believe that even that timeline is far too ambitious, and here’s why:

The Act has been set out over 16 Titles, each dealing with specific aspects of the financial industry that need regulatory overhaul following the 2008 financial crisis. The following is a summary of each of the Titles:

The purpose of this Title is to establish a new structure for supervising inherent risk within the US financial industry. It also brings certain “non-banking” companies, which may be considered to pose significant threat to the economy, under regulatory scrutiny, and increases prudential standards required of a broad spectrum of financial institutions.

This Title specifically addresses concerns that the Fed had regarding their inability to deal with the contagion of risk events in 2008, which initiated from non-banking institutions. The Title now enables the Fed to place both banking and non-banking institutions into receivership under their (Fed’s) watchful eye, in case of a catastrophic event leading to the need to liquidate the company/corporation.

Title III will see the elimination of The Office of Thrift Supervision (OTS), and most of its responsibilities will be shared between three other Agencies, The Fed, the OCC in full (OCC), and FDIC in full (FDIC). FDIC deposit insurance levels for each depositor have also been increased, as has the minimum reserve ratio of the Deposit Insurance Fund.

Title IV—Regulation of Advisors to Hedge Funds and Others

Given that it was hedge funds that are primarily believed to have precipitated the financial crisis of 2008, Title IV seeks to regulate these companies more closely. It puts forward greater obligations onto advisors of private funds, as well as assumes the power to commission reports and studies into the private fund industry (or individual companies therein).

A new entity, the Federal Insurance Office (FIO), has been created under Title V. The primary function of the FIO is to monitor and study the insurance industry, and compile reports and make recommendations to Congress regarding better/more effective regulation of the industry.

The key aspect of Title VI is the “Volcker Rule,” which places stringent restrictions on the ability of certain financial entities to invest in hedge funds, conduct proprietary trading, or invest in private equity funds.

Through Title VII, the Dodd-Frank Wall Street Reform Act (The Act) seeks to establish a fresh set of regulations for the over–the-counter (OTC) derivatives markets. Swap and derivatives dealers are now required to register with the US Securities and Exchange Commission (SEC) or Commodities Futures Trading Commission (CFTC); derivative contracts will be subject to clearing and exchange processes; and the Fed/Federal Deposit Insurance Corporation (FDIC) (i.e., taxpayers) are prohibited from providing insurance coverage to institutions engaged in swap transactions.

Title VIII gives the Fed a broad range of discretion to determine (and mandate) additional regulations, supervision and oversight over payment, clearing and settlement systems.

Title IX—Investor Protections and Improvements to the Regulation of Securities

Title X creates a new Bureau of Consumer Financial Protection (BCFP), which will have sole authority to propose/amend/enact a wide array of Federal consumer protection laws.

Title XI reduces the number of situations in which the Fed can exercise its Emergency Lending Authority. It specifically stipulates that such lending (of taxpayer money) should only be provided in order to induce broad-based liquidity into the financial system, and enforces additional transparency into the Fed’s emergency lending activity, including audits by the Comptroller General, and greater access for the public (i.e., taxpayers) to information about the Fed’s lending practices.

Thanks to Title XII, here-to marginalized individuals and communities will now have greater participation in America’s financial environment by reducing the barriers that existed to such participation until now. This Title ensures greater access to mainstream financial products and services by low and moderate income earners.

Title XIII—Pay It Back Act

This Title reigns in Troubled Asset Relief Program (TARP) appropriations by the Treasury from $700B to $474B, increases the Treasury’s General Reserve Fund, and reduces its deficit. As a result, Title XIII now places more hurdles for government agencies to overcome before approving and using taxpayer money to bail out large, troubled entities.

Title XIV seeks to address many of the ill-conceived mortgage and lending practices that lead to the 2008-09 housing bubble. Under this Title, predatory lending practices by lending companies are discontinued. In addition, lending companies are now mandated to ensure that they cease selling, to any consumer, any products/services that are too difficult (for the consumer) to understand. Explanations of product/service descriptions, risks, liabilities, and obligations must now also be provided (and explained) in “plain English” to consumers.

Title XV covers a number of miscellaneous provisions, from restrictions placed on US funding of International Monetary Fund (IMF) loans to heavily indebted countries, to corporate involvement with Conflict Minerals, to additional health and safety reporting requirements for mine operators, to initiation of a number of studies that can have broad-reaching impact on US financial markets.

This Title seeks to exclude certain types of swaps and securities contracts from preferential Internal Revenue Code (IRC) tax treatment. Under current Section 1256 provision, certain futures contracts can trigger 60% long-term and 40% short-term gains or losses when sold. This results in a favorable tax scenario for such contracts. This favorable treatment is revoked (for some contracts) under Title XVI.