Blockchain Explained – What Is a Blockchain? (Definition & Review)

Unless you have worked extensively in the tech or financial sector, you may be unfamiliar with a developing technology known as blockchain. In fact, you’re probably thinking, “What is blockchain?”

In this article and blockchain review, we will explore “blockchain explained” in the most user-friendly way possible to demystify this new technology and its exciting applications for consumers. 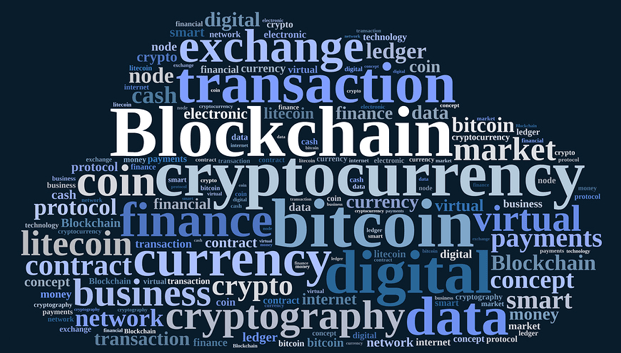 A blockchain is essentially a running ledger of all data transactions that occur across a network. It is helpful to define blockchain by discussing its use in popular bitcoin technology.

See Also: What Is a Decent Credit Score? Get All the Facts! (What Is Bad Credit?)

The World Economic Forum offers this image to define blockchain: 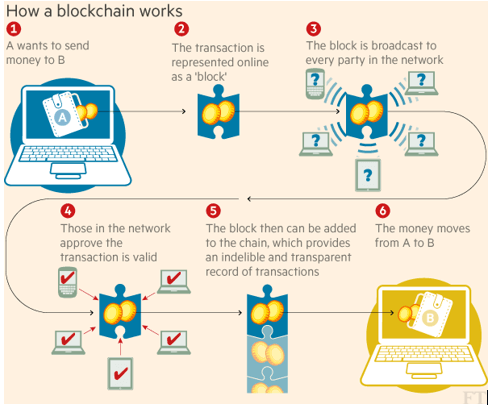 According to the Wall Street Journal, a basic blockchain definition states that blockchain is a data structure that creates a digital ledger of all transactions and shares this information across a distributed network of computers.

The blockchain uses cryptography to allow each user on the network to add information to the chain securely. These transactions occur without the need for a central authority or “middle man.”

It may be easiest to understand the concept and implications of a block chain through the use of an analogy. For example, pretend a group of 10 people witness an event. Those 10 people are questioned about what they saw, and they all report seeing the same event. Blockchain technology uses this consensus reporting to verify all information and transactions.

A Linkedin article offers a great expanded version of this analogy to help readers understand blockchain technology. The benefit of a block chain is that all transactions must be verified by a consensus from multiple parties rather than one central source. This increases security for users and their data transactions. Altering data in the block chain would be like getting more than half of the people in our analogy to lie about what they witnessed.

Also, the website Investopedia offers the idea of blockchain explained as an analogy. In banking terms, the blockchain is like a history of banking transactions that appears chronologically. Each block is like an individual bank statement.

Don’t Miss: What Is Brexit? – Get the Definition & Review (Britain Leaving EU?)

In this blockchain review, we also want to define blockchain through describing the basic technology behind the innovation. Each computer connected to the blockchain network is called a node. The computer must connect to the network using a client that performs the task of validating transactions and information.

Every computer in the network receives a copy of the blockchain. Information entered into the blockchain creates a new potential “block” of data. Each node then validates this data against the history in the block chain.

Once the information is confirmed by each node, the transaction is complete, and the new “block” is officially added to the block chain and stored.

There are a variety of different types of technology that can be used in blockchains. In this section, you will find blockchain technology explained through exploring various types of networks.

Different blockchain configurations exist that utilize a variety of consensus systems, which are used for certain types of networks and practical applications.

For example, the bitcoin network uses a public, permissionless system, meaning that any consumer can participate in the network as long as he/she logs into the system using a key. Other companies or groups could use a private or permissioned blockchain to suit their digital information needs.

Three main technological components are important to understand while answering the question, “What is blockchain?” According to the Wall Street Journal, blockchain’s main technological components are a network of computers, a protocol for the network, and a consensus mechanism. For example, the bitcoin network has participants run algorithms for consensus to confirm transactions and signatures to verify information.

There are a variety of uses and interesting technological implications created by the development of blockchain networks. In this section of our blockchain review, you will find blockchain explained in depth through its application to finance and development.

In general, the use of blockchain technology gets rid of the need for a middleman in financial transactions. For example, trades and transactions could be completed in seconds if banks were included in the blockchain network.

This would potentially save a great deal in resources and cut costs significantly. The strength of blockchain is its ability to establish trust and inherent security, making it possible to remove the middleman.

Industries that utilize blockchain technology include:

Blockchain technology has the potential to be used to prevent fraud in high-value industries such as fine art and diamonds. The technology could be used to create a definitive registry and trace the truth about these high-value items in the trade. Currently, fraud often occurs because the systems used are vulnerable to security breaches since the information can be easily falsified by users.

Related: What Is Debt Consolidation? Is It Good or Bad? (Ways to Consolidate & Explanation)

It may be most relevant to explore blockchain explained as part of the bitcoin network. Bitcoin is a type of digital currency that allows users to make transactions without a credit card or bank. Users have a bitcoin address and a private key to access their bitcoins. Bitcoin allows users to send money to others over the Internet without tracking personal information about the users.

There are a wide variety of bitcoin clients available for interested users, which are described in the next section of the blockchain review.

There are a rapidly growing number of tech startups and businesses that are taking advantage of this revolutionary blockchain technology. In this blockchain review, the pros and cons of a variety of blockchain startups, businesses, and technology will be discussed.

This blockchain review will explore blockchain explained through its application in wallets and other budding tech startups, allowing you to determine if this technology can meet your needs. Let’s look at the most popular application of blockchain technology: bitcoin.

Although the concept of a blockchain tends to be highly secure, it appears as though the famous blockchain.info wallet has experienced its share of technological and security concerns. There have been reports of hacked accounts and a variety of other security issues. The website bitcoin.org has also decided to remove blockchain.info from its list of recommended sites for wallets.

What is a Blockchain and a Bitcoin Wallet?

There is a variety of reports available stating that there are frequent blockchain.info thefts. Many users report that their bitcoins were stolen from their wallet. Although blockchain.info is the longest-standing bitcoin wallet, many users are hesitant to recommend this wallet because of security issues.

The blockchain.info wallet offers a web platform, android, and iOS apps. Consumers can take advantage of the web and mobile wallet features. This wallet offers SharedCoin, which mixes your coins to make it difficult for other users to view your bitcoins. The custom send feature allows users to add notes and messages to the blockchain. 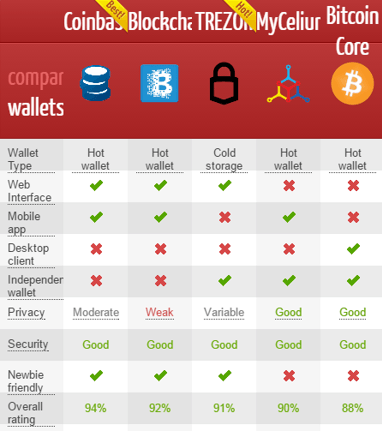 In this blockchain wallet review, the following wallets are offered as the best bitcoin wallets:

This section of our blockchain review will discuss the highly rated Coinbase bitcoin wallet. According to the 99bitcoins review, Coinbase is the highest rated bitcoin wallet for 2016, with an overall rating of 94%.

Coinbase was founded in 2012 and has received over $31 million in funding. The service is beginner-friendly and an established wallet option. Coinbase also allows users to add funds from within the wallet and uses a vault service to deny the company control over bitcoin funds.

One great feature of Coinbase is the ability to link a bitcoin wallet to a bank account. It offers a USD wallet to take advantage of bitcoins if the price drops. It also offers tools for merchants. In addition, Coinbase offers users a URL to allow others to look up a website with a QR code for every transaction.

Coinbase allows users to convert bitcoins into dollars and euros using the mobile app. The Coinbase wallet also uses two-step authentication, meaning that it uses a passcode, as well as authentication, through Google for extra security.

For consumers concerned about security risks, the wallet GreenAddress is well known as the most secure mobile wallet. The wallet uses two-factor authentication, meaning that it requires a passphrase and a phone number (or email, SMS, Google).

Additionally, the wallet utilizes a 4-digit pin for extra security. This may make it more challenging to access your bitcoin wallet, but perhaps the extra security could be worth it with the risks associated with wallets such as blockchain.info.

Is Blockchain Technology Right for Me?

One of the most interesting promises of blockchain technology is that it eliminates the need for a middleman in financial transactions between parties. According to the World Economic Forum, this could potentially eliminate inefficient banking protocols and could save consumers and financial services billions of dollars.

The website Medium offers a variety of blockchain reviews and wallet feedback. Although there are reports of security concerns, many users still support the blockchain.info wallet, stating that the wallet is their go-to bitcoin wallet. Users of MyCelium state that the interface is a little unfriendly for new users but offers new adaptive features. Other users of the Coinbase wallet state that it is very easy to use and has a great iPhone app.

In the search for blockchain wallets, there are a wide variety of options for consumers interested in bitcoin technology. In this article, we have answered the question, “What is blockchain?” and attempted to offer information about blockchain explained in the most consumer-friendly manner.

This blockchain review offers a blockchain definition, as well as bitcoin wallet applications, to help you decide if this budding technology suits your needs.