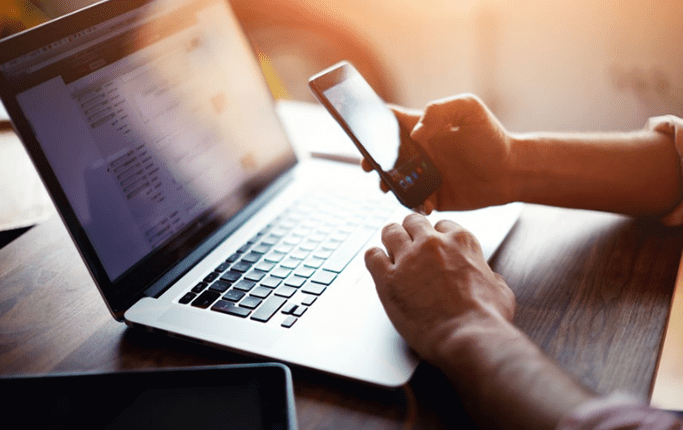 In recent years, Ally Bank has emerged at the forefront of online banking and has made a big impact on consumers with its high-interest savings accounts and easy-to-use online platform.

In this Ally Bank review, AdvisoryHQ will conduct both an Ally Bank savings review and Ally checking review as well as go over some of the other financial products available. We will also take a look at some consumer reviews of Ally Bank.

What Is Ally Bank?

Ally Bank is an Internet-bank based in Utah. Since Ally is an online bank, there are no bank branches for consumers to visit, and all banking transactions are performed solely online.

In 1919, the bank opened its doors in New York City and later that year added offices in Detroit, Chicago, San Francisco and Toronto 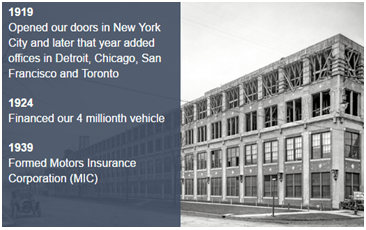 Although it adopted the name “Ally Bank” in 2010, the company has been in business since 1919, when it first opened its doors as GMAC – a division of General Motors – where it helped car dealerships finance their inventory.

It eventually became involved in the banking industry and decided to establish an online bank in 2010. 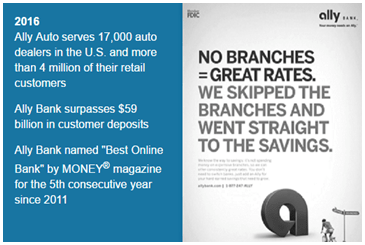 Some people may baulk at placing their money in a bank that doesn’t have brick-and-mortar offices that they can visit, but not having the large overhead of operating bank branches does come with some advantages. In fact, many Ally financial reviews show that it consistently offers one of the highest interest rates in the country on its savings accounts.

Even though it is an online bank, Ally Bank is FDIC-insured. It also offers a myriad of consumer financial services similar to any other bank, including checking, savings, money market accounts, and CDs. 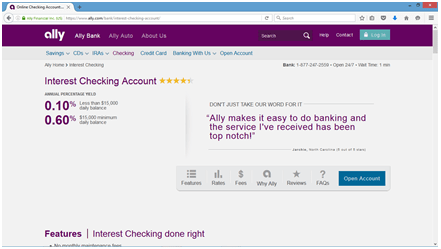 Ally Bank offers an interest checking account that comes with no maintenance fees attached. Though Ally itself doesn’t have ATM machines, customers can access any Allpoint ATM across the country for free, and it will also reimburse checking account holders up to $10 per statement cycle for ATM fees incurred at non-supported ATMs. In its Ally Bank review, NerdWallet lists access to over 43,000 free ATMs nationwide as a pro of its checking account.

Checks are able to be deposited into the account remotely using Ally’s eCheck deposit service. Checking account customers also have access to a debit card, checks, and online bill pay. With no minimum deposit amount required, an Ally checking account is easy to open.

Ally reviews of the Ally Bank checking account are mostly favorable, with many consumers listing no monthly fees and the fact that they earn interest on their balances as the best features. 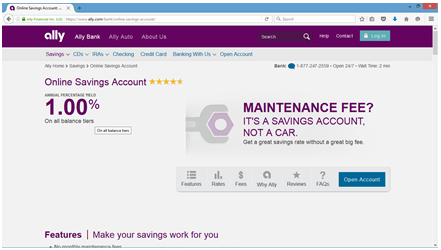 An Ally Bank savings account offers many benefits to consumers. The main benefit is that Ally is able to offer a higher interest rate than most banks due to its low overhead. It currently offers an annual percentage yield (APY) of 1 % with interest compounded daily.

Much like its checking account, the savings account also has no monthly maintenance fee, no minimum initial deposit, and checks are deposited through its eCheck deposit system.

Ally bank reviews of its savings account are overwhelmingly positive, with many consumers touting the above-average interest rate as its best feature. 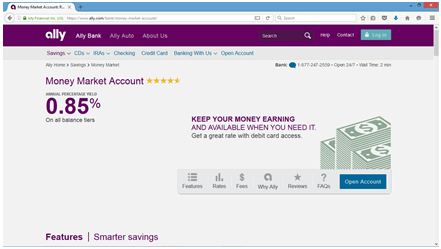 Ally Bank’s money market account shares similar features with its savings account, such as a higher-than-average interest rate that is usually within a few basis points of the savings account rate, no minimum deposit, and no monthly balance to maintain.

Consumer Ally reviews of its money market account are extremely positive, with 93% of its customers stating that they would recommend it to a friend. 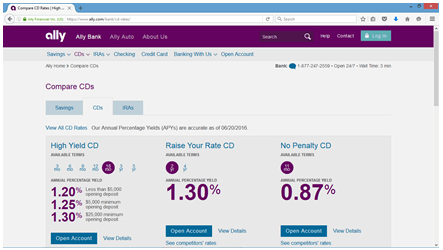 Ally offers both regular CDs as well as IRA CDs. CDs are available with terms which range in length from just 3 months to 5 years. There are no maintenance fees for an Ally Bank CD, and once it has reached maturity, money can be withdrawn at no charge during a 10-day grace period. Its rates are competitive, and it offers three different CDs to choose from.

Its CDs are a popular product, and NerdWallet gave Ally’s CDs a rating of five stars in its Ally Bank review.

Its 11-month No Penalty CD features a rate that is very similar to its savings account rate. This CD allows consumers to withdraw their money before the term has expired with no penalty. In their Ally Bank reviews of this product, many consumers stated that the early withdrawal without penalty clause is what led them to choose this particular product.

Ally’s High Yield CD offers very competitive rates, with its rate being higher than the savings account rate on CDs when the term is longer than 12 months. Consumers can choose from terms that range from 3 months to 5 years. Interest is compounded daily to help consumers grow their money as quickly as possible.

Many consumers speak positively in their reviews of Ally Bank’s High Yield CD, with the competitive interest rates being touted as the most attractive feature.

Ally’s Raise Your Rate CD allows consumers to raise the rate on their CD if rates go up during the CD term. This CD has two term options to choose from: 2 years or 4 years. Consumers may raise their rate once during a 2-year CD or twice during a 4-year CD. They also have the ability to log into their account online and raise their rates themselves.

Ally Bank reviews show that customers see this product as being favorable. In one consumer’s review, she stated that she appreciated not being locked into a lower rate if rates do happen to go up. 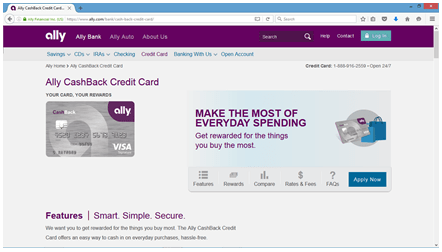 Just unveiled in June 2016, Ally’s CashBack Credit Card offers qualifying consumers 2% cash back on groceries and gas and 1% cash back on all other purchases. There is no limit to the amount of rewards that can be earned, and the credit card is offered with no annual fee.

This credit card also offers a $100 bonus for customers who make $500 in eligible purchases in the first three months as well as a 10% bonus when cash awards are deposited into an Ally bank account.

In its Ally review of the new CashBack credit card, MyBankTracker found that this card as a good choice for someone who spends a lot on gas and groceries specifically.

Ally Auto also finances RVs. It will finance RVs up to 10 years old with up to 75,000 miles on them. In addition, it offers financing for 5th wheels, travel trailers, and pop-ups.

While, overall, Ally Bank reviews are mostly positive, reviews of Ally Auto tend to be much more negative. Many consumers complain of poor record-keeping on Ally Auto’s part which has resulted in unfair repossessions or collection calls when the account is actually current. Another major complaint of consumer Ally financial reviews about Ally Auto is that its customer service department appears to be based overseas, making it difficult to communicate with their customer service representatives.

A simple Google search will unearth a wealth of consumer reviews of Ally Bank. In this section, we will take a look at both the positive Ally Bank reviews as well as the negative ones. 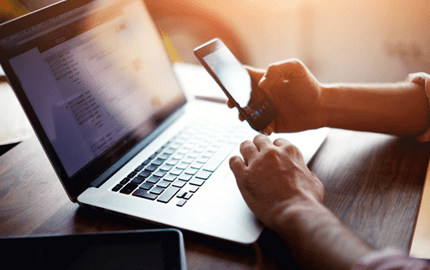 Consumer reviews of Ally Bank are mostly positive, with one consumer stating that “Ally is clearly the best way to go for online banking.” Many customers seem to agree with this sentiment, rating the bank’s services in their Ally reviews with four or five stars.

In his Ally Bank review on credio.com, one consumer described Ally as being “a truly hassle free bank,” and another Credio user proclaimed Ally to be “a refreshing change in the banking industry” in his five-star Ally review.

Most consumers tout the high-interest rates and the availability of an interest-earning checking account as Ally’s best features in their Ally Bank reviews. Good customer service is also credited in many five-star reviews of Ally Bank.

While the majority of reviews are mostly positive, there are also some customers who have had a less-than-stellar experience. Many of the negative Ally Bank reviews are left by customers of Ally Auto, who are unhappy with poor customer service and poor record keeping.

Some of the negative Ally reviews are connected to Ally Bank, however. One customer, in his Ally Bank review on MyBankTracker.com, complained about the inability to deposit cash. The same customer had additional complaints in his review of Ally Bank about there being a two-day waiting period before funds are available on deposited checks and only being able to deposit checks through Ally’s app.

Another MyBankTracker user complained about the necessity for filling out physical paperwork and mailing it in to be able to open an account in her Ally Bank review. She claims that this need for physical paperwork to be mailed causes a large amount of processing time to pass before the account can be activated.

Ally Bank has gained a stellar reputation as a leader in the online banking industry, with many satisfied customers. The bank has received many awards and recognition for being the best online bank and is often seen as being a top rated bank by consumers. MyBankTracker gave the bank an A+ rating in its Ally Bank review, and NerdWallet gave it a 4.5 star rating.

Many Ally reviews show that consumers see the higher-than-average interest rates available on Ally Bank’s savings and money markets accounts as being its best feature. It also offers no maintenance fees and no minimum deposit.

However, there are also downsides to using a completely online bank which should be carefully considered. There is no option available for making cash deposits, and checks can only be deposited through Ally’s eCheck deposit app. Since there are no brick-and-mortar branches available, customers lose the ability to meet a representative in-person to get issues resolved.

Hopefully, this article has proven helpful in your decision of whether or not to use Ally Bank’s services. If you are comfortable with the idea of working with an online bank and value a high-interest rate on your savings, then Ally Bank may be a good choice for you.